Tidal notches are a generally excepted sea-level marker. Particularly in the Mediterranean, those shoreline indicators are oftentimes used to infer coastal coseismic activity when they occur displaced from present day sea-level. Now, paleoseismologists should be able to visualize coastal evolution in order to better understand coseismic history. 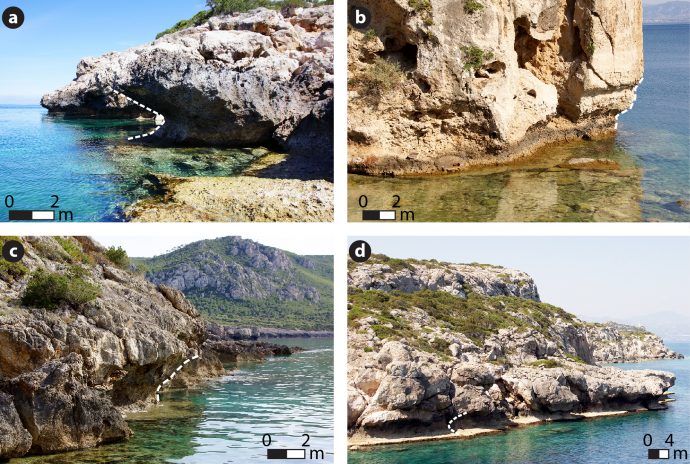 In my last post I presented our work on morphological feature detection using terrestrial laser scanning. In conclusion, the analysis showed evidence for paleoshoreline morphologies even in between major emergence which might yield in more reliable paleomagnitudes in rifting regions, in particular.

Tidal notches develop mainly due to bioerosive activity with contributions from physical and chemical agents. Restricted to carbonate rocks, relevant grazing and boring organisms like the famous Lithophaga lithophaga evenly affect subhorizontal shorelines within the tidal range. Pirazzoli (1986) depicts a model tidal notch profile consisting of three main sections: I) A floor or base which extends to the limit of permanent immersion at tidal low stand, II) a retreat zone of maximum concavity exhibiting the inflection point near mean sea-level, and III) a roof near high tide level. The resulting most common profile follows a U-shape or V-shape with the line of symmetry at mean sea level. Erosion appears to be most active where the environmental processes interact frequently. The periodic parameter is given by the tide. Thus, mean sea level and deepest indentation have to meet at the center of a symmetrical structure for the first order. Therefore, time controls the deep of a tidal notch if lithological, biological and climatic conditions are uniform. Generally observed for the Mediterranean are erosion rates of 0.2 to 1.0 mm/a (Pirazzoli and Evelpidou, 2013).

From erosion rates above it is obvious that balanced conditions between eustasy and isostasy have to persist for about 200 years to develop a significant 20 cm deep notch. However, gradual sea-level change or fast coseismic displacement may alter the erosive period and thus yield in notch displacement or notch widening. Presumably, a mixture of both is the truth for present-day cliff faces. 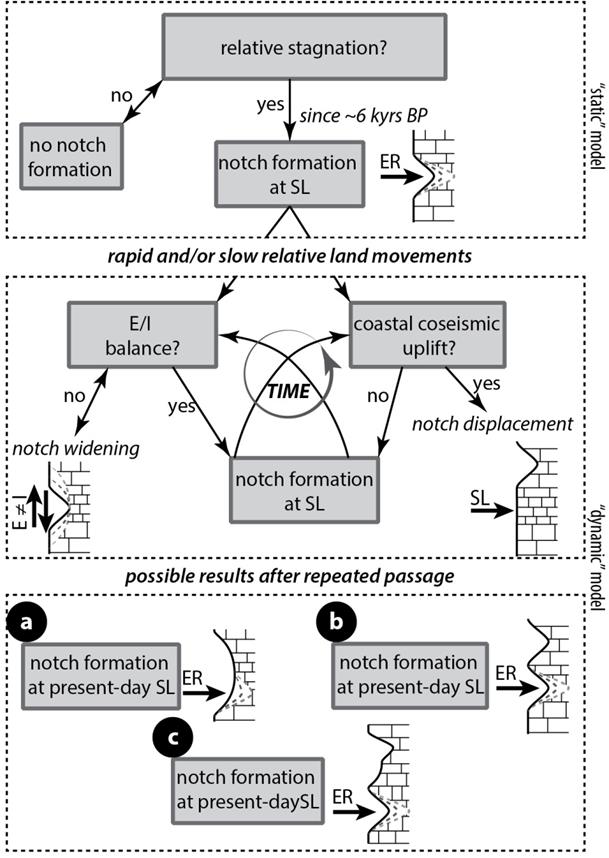 A simplified description for single tidal notch development is supported by sheltered conditions and the absence of biological accretions. Then, the coefficients of a quadric polynomial can cover the requirements to describe such symmetrical shapes. As in a conceptual static model, notch depth is specified by erosion rate (mm/a) x time (a) of a constant erosional base. 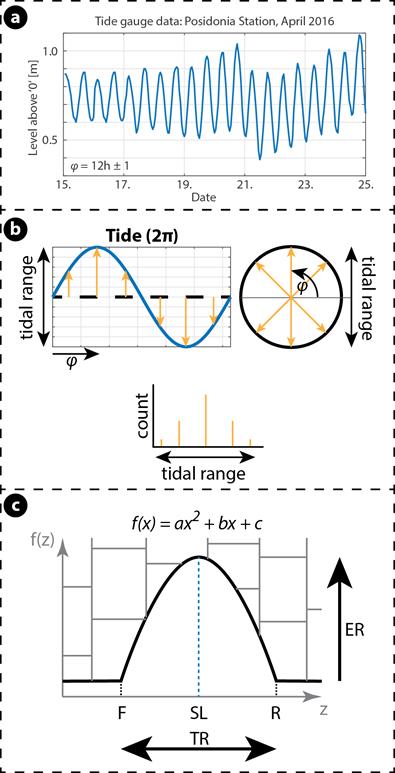 The dynamic model calculates the parabolic erosion for every year considering both rapid and slow relative sea level changes and computes the cumulative sum of erosional impacts. Using a local sea level curve and information regarding ongoing isostatic and dated coseismic uplift as inputs to control the migration of the erosional base enables us to describe the vertical cliff morphology at a given moment.

In order to consider the change of the erosional base through the Holocene, the difference between a given sea-level curve and applied coastal uplift is included. When correcting a sea-level curve for the isostatic trend, the time of notch formation is indicated for periods where the gradient is ~0. 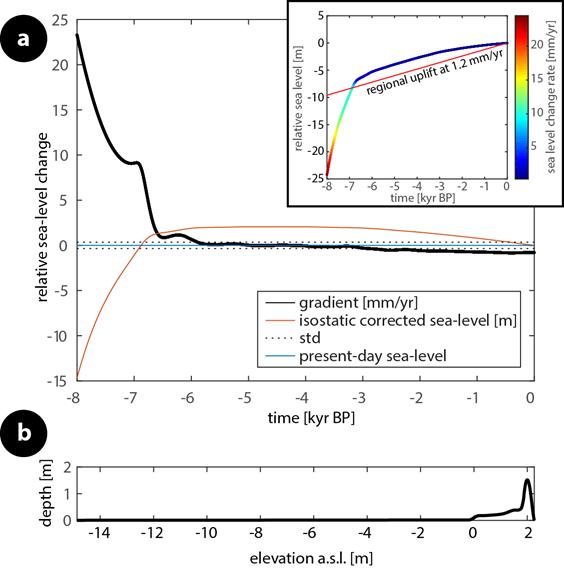 Simulations for eight different localities throughout the Mediterranean suggest that tidal notch development and preservation occurs very variable even in local scale. Even without any coastal coseismic activity modern cliff faces may exhibit late-Holocene shorelines significantly different from present-day sea-level. 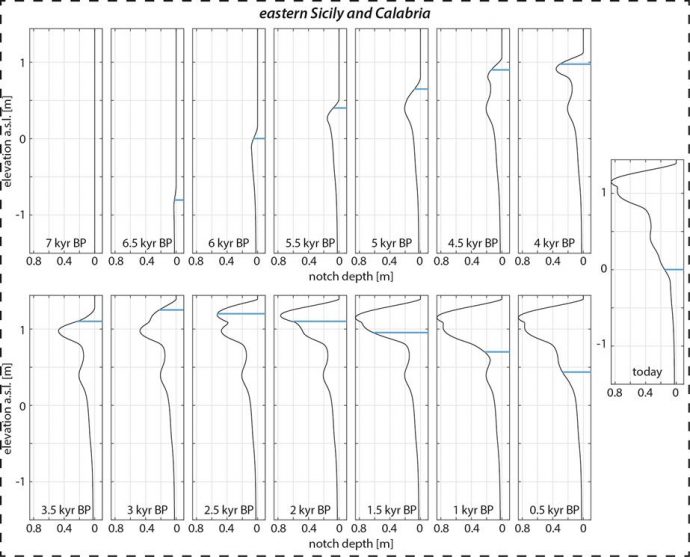 Depending on regional eustatic and isostatic conditions even along generally subsiding coastlines tidal notches may develop and appear submerged without any complex coseismic contributions. This is clearly in contrast to scientific assumptions made so far (e.g. Boulton and Stewart, 2015).

Also, the modeled cliff sections show the significant impact of the applied sea-level curve shape on time and duration of notch formation in accordance to a given constant coastal uplift/subsidence. Dependent on the shape of the sea level curve the cliff morphology results from grazing, incising, and overwriting only from gradual climatically driven sea level changes. When introducing coseismic activity to the model even more dynamics are addressed in the system. The abrupt migration of the erosional base potentially yields to the development of an entirely new notch generation. However, in combination with an arcuate-shaped erosional base height curve the migration is not oriented purely in one direction. Furthermore, repeated coseismic activity results not necessarily of the same migration stepsize since rates of a mean relative sea level change vary from ascending (~6 kyr B.P.) to flat (~4 kyr B.P.), and also descending (~2 kyr B.P.). As a result, lower sections of a modern cliff face potentially formed the strandline at least two times since 7 kyr B.P.

Including coseismic offset possibly results in one of two options: I) rapid displacement of the erosional zone causing the development of an entirely new notch generation, which likely overprints older features to a greater or lesser degree, or II) prolonging or re-entering the erosive phase at a certain level in periods of gradual sea-level change. Furthermore, the modeled scenario for Cape Heraion in the eastern Gulf of Corinth (Greece) illustrates that a notch sequence on a modern cliff from top descending to sea level is not inevitably of decreasing age caused by coseismic uplift events in periods of slightly outpacing sea-level rise. Moreover, when rapid coseismically induced displacement prolongs the erosive phase the modern expression cannot be used to infer information about the specific event since it only causes deepening of the preexisting notch.

The application and results should contribute to future paleoseismological studies since the biasing interplay between gradual sea-level change and rapid coseismic displacement is visualized indicating the modification of tidal notches towards their modern occurrence. Furthermore, the simulations show that even entire notch sequences may occur on modern cliff faces even without any coseismic contributions and thus tidal notches may not be used as primary earthquake geological effects without considering detailed sea-level history.