The Megablock Complex: An example from the East African Rift

Recognizing and interpreting seismite horizons (soft-sediment deformation generated by earthquakes) preserved in the sedimentary record is an underappreciated approach for paleoseismic analysis. The addition of sedimentological studies to a toolkit that includes other well-established methods, such as instrumental seismic monitoring and fault trenching, can provide a less expensive and more practical option for earthquake hazard prediction and preparation in certain areas. For example, this may be a good option in less developed regions and in areas where fault trenching may not be possible. Moreover, there is a lot that we can learn rheologically from the study of seismites that could be invaluable for modeling the behavior of the surface/near-surface during seismic activity. Similarly, investigating Quaternary strata in areas that may be prone to seismicity, which may or may not have a recorded history of major earthquakes, can illuminate important information about earthquake recurrence patterns and intervals, in much the same way as fault trenching.

Our recently published paper on ancient earthquakes in the Rukwa Rift Basin of southwestern Tanzania highlights the value of the sedimentary record for understanding paleoseismicity. Working with a team of geologists and paleontologists (The Rukwa Rift Basin Project) over the last few years, I had the opportunity explore a broad region containing well-exposed Quaternary sediments, and was able to identify and document countless seismites. This included unprecedented expressions of seismogenic soft-sediment deformation that suggests recurring, high intensity earthquakes and associated deformation in a growing population center that is not particularly aware of the seismic hazards that exist today. While historical and instrumental records from the last ~75 years suggest that this part of the EARS can produce small to moderate earthquakes, what may we learn if we can extrapolate back tens of thousands of years? 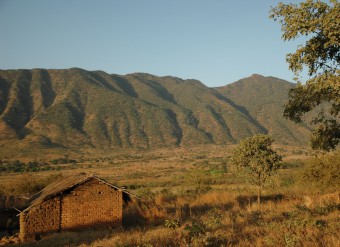 A traditional brick home near alluvial fans coming off of a fault splay in the Rukwa Rift Basin of the East African Rift System.

Here in the Rukwa Rift Basin, datable, sedimentary rocks have preserved the effects of earthquakes, including a significant, high magnitude event (likely M>6) that struck southwestern Tanzania nearly 28,000 years ago near the present-day regional capital of Mbeya. The near-surface deformation in response to this ancient earthquake is remarkable and perfectly preserved within the rock record. We have termed the resulting seismite morphology a “megablock complex”.

The Megablock Complex includes massive blocks of coherent rock (for example, the megablock is ~ 10m x 20m) that were broken and displaced upwards tens of meters towards the surface. The driving force was a significant amount of fluidized sediment, remobilized by seismic overpressuring. This fluidized sediment also made its way to the surface and likely erupted there. Superimposed on top of this whole lot is a clastic injection dyke, which entrained large metamorphic cobbles. 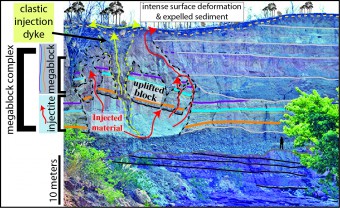 The “Songwe Megablock Complex” described above, is a prominent feature of this cliff face along the Songwe River (look at the small person for scale near the tree on the right hand side). Publication in PLoS ONE here.

For some time our team regarded the “Songwe Megablock Complex” to be a spectacular soft-sediment deformation feature. However, a moment of enlightenment came for us after we obtained carbon dates for a similarly impressive, large-scale soft-sediment deformation feature in the rift, characterized by dekameter-scale, asymmetric, recumbent folds, about 35 km northwest of the megablock. It turns out that the large folds and the uplifted megablock formed as a result of a single event! It was then that the true magnitude of this event dawned on us and we realized the potential value of studying the sedimentary rocks for clues to ancient earthquakes.

The Rukwa Rift Basin is a segment of the Western Branch of the East African Rift System (EARS). It lies at what may have been a failed triple junction, and records periods of rifting and uplift since the Late Permian. Despite this long-lived, tectonically active history, the seismic activity of the East African Rift is largely unknown before 1880, and even so, our records are incomplete or inaccurate since then.

In 1910 the most powerful earthquake in Africa of the twentieth century (Ms 7.4) struck the Lake Rukwa region, collapsing houses, initiating standing waves in nearby water bodies, causing ground deformation, and triggering liquefaction and fluidization of saturated subaerial and submarine deposits. The interpretation of the megablock complex now confirms a recurrence of such large magnitude earthquakes in this region.

A panoramic field photo of the Songwe Megablock Site. The megablock complex can be seen in the middle of the photo. See the figure above for exact location of the seismite. 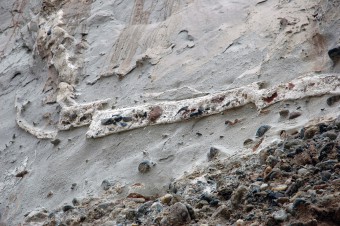 While it is difficult to quantitatively assign a paleo-magnitude to this seismic event(s), this photos shows cobbles entrained in the clastic dyke that is superimposed on the megablock complex, as well as in the bottom of the fluidized, injected material (grey), which suggests very intense seismic activity.

The documentation and interpretation of this unprecedented, large-scale seismogenic soft-sediment deformation (the megablock complex) is a warning that this portion of the East African Rift has the potential to produce significant, destructive earthquakes, well above the magnitude predicted by short instrumental seismic records. As the population in the East African Rift, as well as the global population, expands rapidly and turns to more modern techniques of construction, it is increasingly important to better understand the behavior of near surface sediments during deformation and also to expand the record of known earthquakes to recognize patterns in long-term earthquake recurrence intervals. Looking to the sedimentary record and recognizing seismites is perhaps a very useful tool for hazard modeling and preparation for future seismic events.

For further details and discussion, feel free to access the full paper here.

PhD candidate at the Department of Earth and Oceans, James Cook University, QLD, Australia. She is a geologist combining sedimentology with geochronology, thermochronology, and geochemistry to answer exciting tectonic questions -- particularly in rift settings. Hannah is fascinated by seismites and looking for new ways to use the sedimentary record to reveal and investigate ancient earthquakes.