New papers on paleoseismology in the Tien Shan

Between 1885 and 1938, the northern Tien Shan at the border between present Kyrgyzstan and Kazakhstan experienced a remarkable series of five major earthquakes, exceeding M6.9 and reaching up to M ~ 8 (1885 Belovodskoe M6.9, 1887 Verny M7.3, 1889 Chilik M~8, 1911 Chon Kemin M8, and 1938 Kemino Chu M6.9). Combined, the seismic moments add up to almost moment magnitude 9, which is a significant amount of strain released in roughly 50 years and across an E-W stretch of less than 500 kilometers. Even more intriguing is the fact that the ruptured region is located more than thousand km north of the nearest plate boundary and associated India-Eurasia collision zone. The macroseismic areas of these earthquakes include the present-day capital of Kyrgyzstan, Bishkek (Frunze) and the former capital and still largest city of Kazakhstan, Almaty (earlier names Alma Ata and Verny). 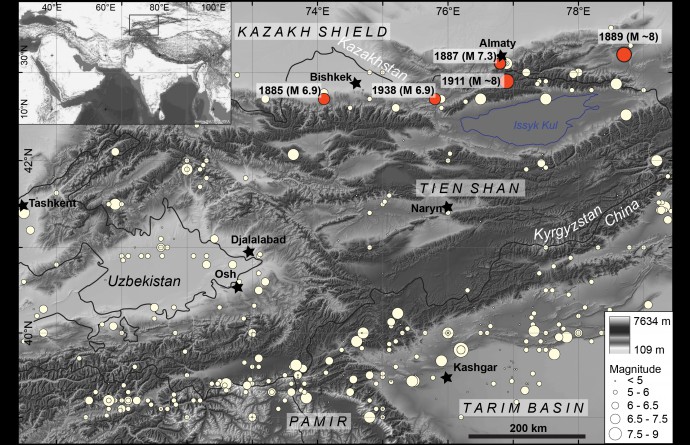 Map of the study area and location of the great earthquakes.

Even back then, the region was populated, albeit quite heterogeneously, and witness reports and records of damage exist for basically all of these events; some have even been systematically evaluated or mapped in the field by early geologists (Ignatiev 1886; Mushketov et al. 1891; Bogdanovich et al., 1914). Very early instrumental records exist for the 1889 and 1911 earthquakes and have been recently re-investigated; the results have just been published (Kulikova and Krüger, 2015; Krüger et al., 2015). 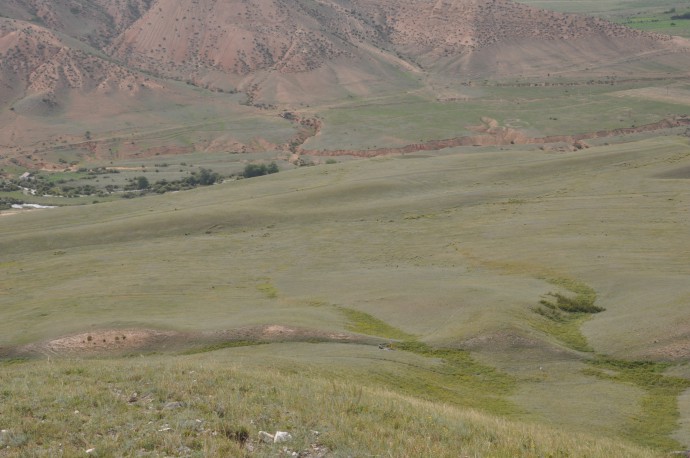 The Saty branch of the Chilik fault near Saty with left-lateral strike-slip and thrusting. Note people and LiDAR in front of the scarp. 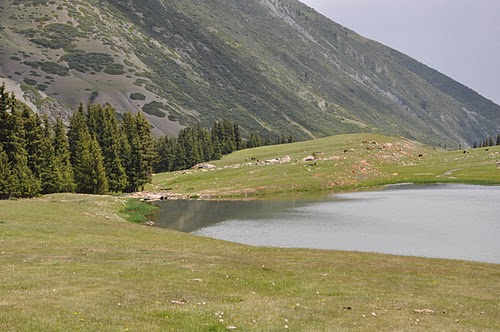 Fault scarp at Chon Aksu that is the result of the 1911 rupture. The scarp has dammed a lake, which is still there after > 100 years.

As expected for an event of such a magnitude of eight, the rupture, even if complex at places, extends for more than 195 km and has mapped dip-slip offsets ~3-4 m average slip and peak slip of <14 m. 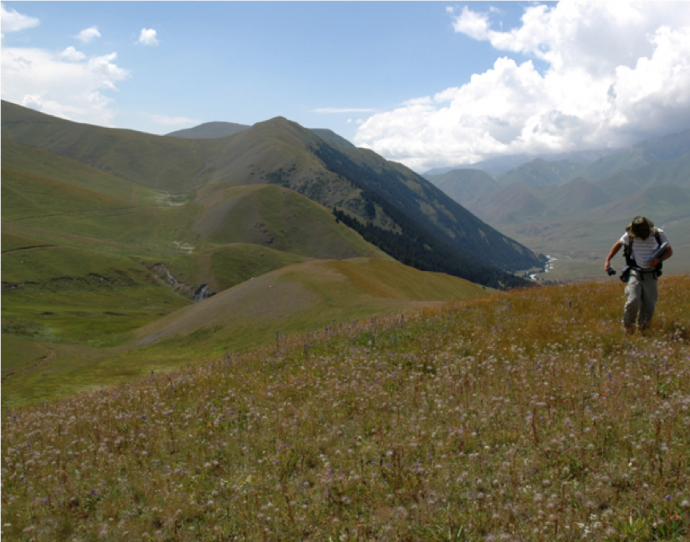 In contrast, the Chilik earthquake of 1889 (Abdrakhmatov et al., 2016; corresponding author R. Walker) is still enigmatic in the sense that no continuous and through going rupture of similar extent has been completely documented. 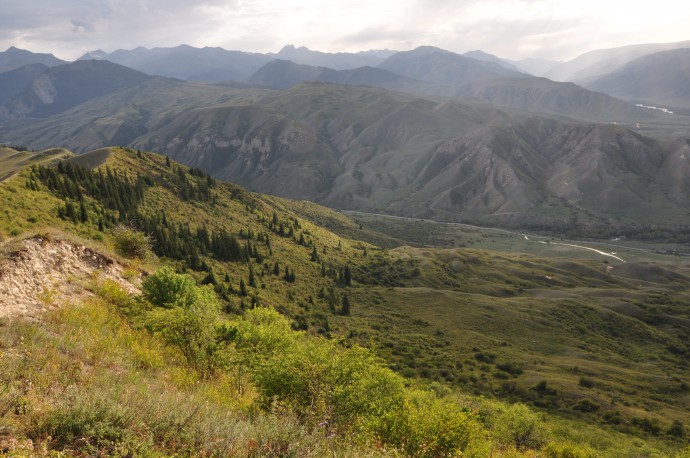 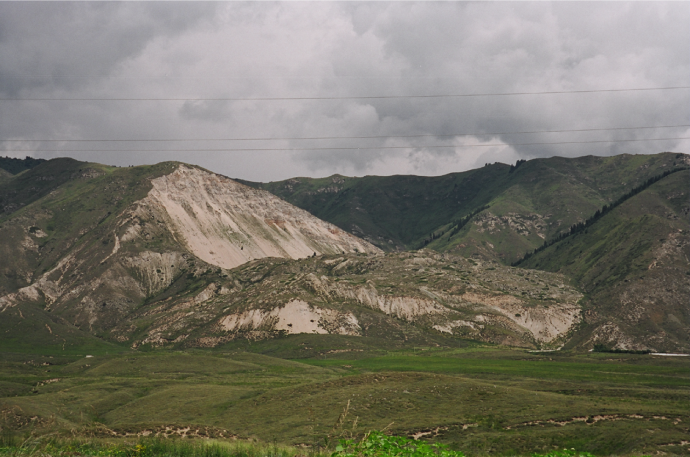 Ananevo Landslide (triggered during the 1911 earthquake)

In the field and on satellite imagery, there is ample evidence for juvenile fault scarps in the epicentral area, but the pattern is very complex, arguing for segmented rupture, involving conjugate oblique left-lateral and right-lateral slip on separate faults. Dip-slip and lateral offsets exceed several meters. 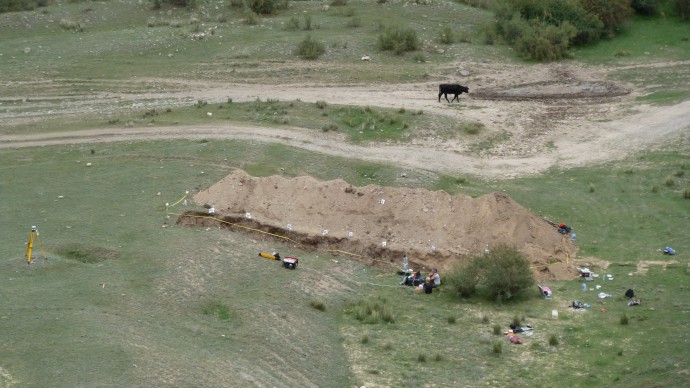 The paleoseismological trench near Saty. 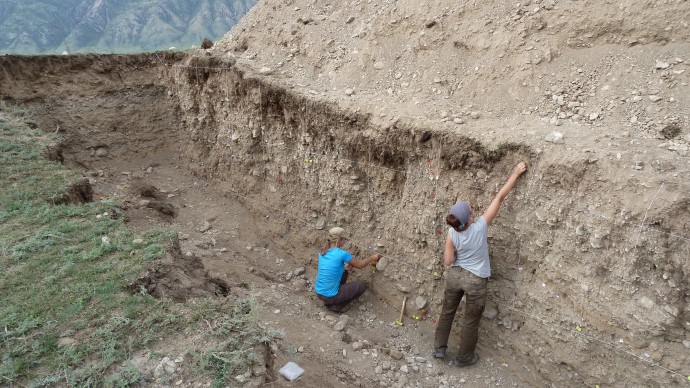 Working in the trench.

Interestingly, the first event of the sequence, i.e., the 1885 Belovodskoe earthquake is spatially separated from the remaining sequence by a (seismic?) gap of about 200 km. Landgraf et al., 2016 show for an area west of this event, which has not been affected by the entire sequence, that earthquakes of comparable size to the 1885 event occurred there infrequently and probably involved incomplete ruptures with respect to the full length of the fault. 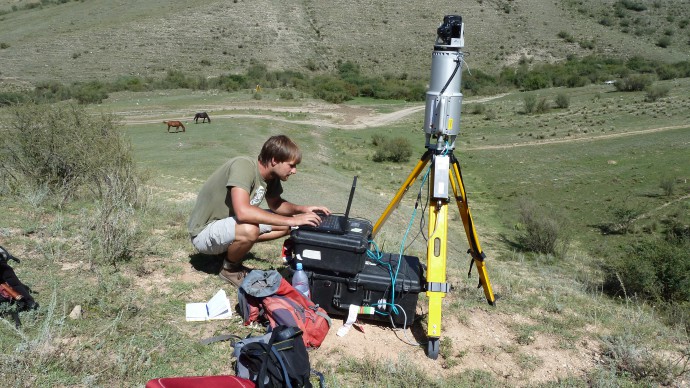 Setting up a laser scanner. 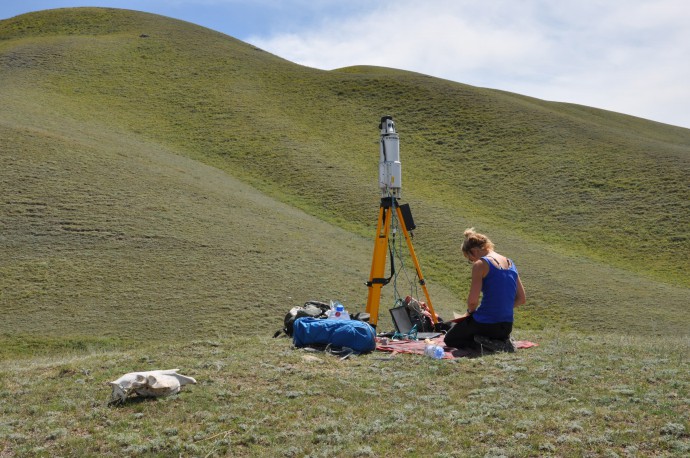 Laser-scanning the fault, taking notes on the technical details. 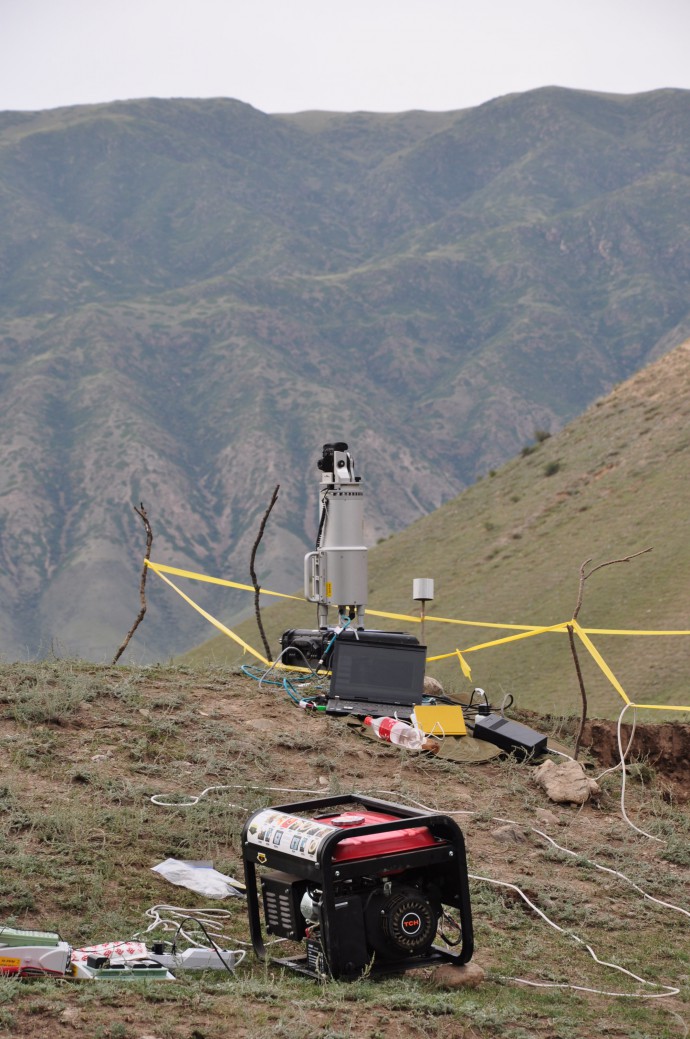 High-tech in the field: The laser scanner, the generator and a world-class security fence. 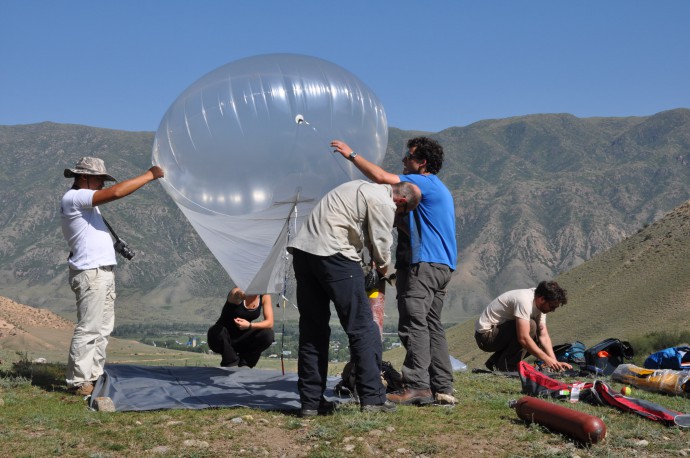 Setting-up the helium ballon for taking aerial imagery from the fault. This allows for photogrammetry (Structure-from-Motion) which we use to creat high-resolution DEMs. 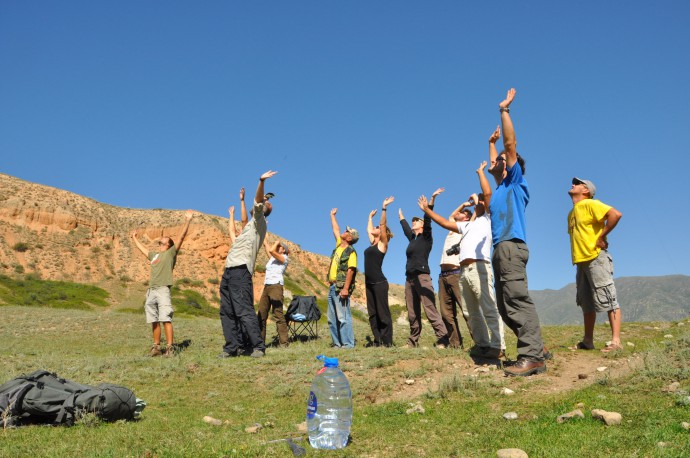 Yeah – the balloon is flying! And we do some Yoga exercise.

Research is still ongoing; the 2016 field campaigns of the different groups are already in preparation. We all look forward to more interesting results from this great spot of the world and will be happy to share them with you.

Looking for the earth's faults.