Our latest paper on coastal change in Oman deals with an extreme flood event that was recorded in an archaeological site in Ras al Hadd, at the easternmost tip of the Arabian Peninsula. We found multiple evidence for tsunamis that hit Oman’s coast in the past. Close to Fins, mega-boulders were thrown on a cliff by huge waves. Fine-grained sediments typical for tsunami action were found in the same area. Searching for further evidence, we came across the archaeological site of HD6 in Ras al Hadd. The archaeologists who were excavating this site told us about strange findings in the archaeological record – they encountered a layer that interrupted the otherwise continuous stratigraphy of the settlement. The bronze age fishing village is located very close to the coast only a few meters above sea level, a large tsunami could easily impact here. 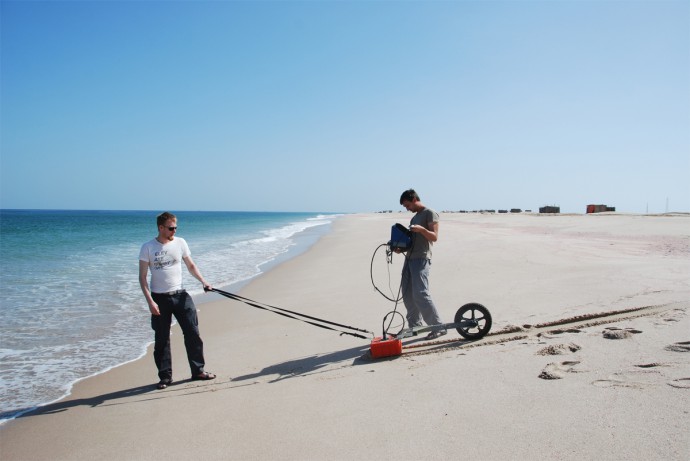 We dug several trenches in the vicinity of the village to trace the suspect layer and to determine its thickness. The layer is rich in charcoal and we also encountered shells with both valves joined, indicating that they were not eaten by our ancestors, but washed ashore alive and died there. The layer showed features typical for natural sedimentation instead of anthropogenic deposition, but included fragments of bricks and debris from the underlying layers. All in all, it looked like something had washed across the village, transporting marine sediments, devastating houses and dwellings, and left behind a layer that testifies to the force of destruction. Shallow drillings helped us to map the layer, but we decided to use ground penetrating radar (GPR) for a more detailed reconstruction of the extent. 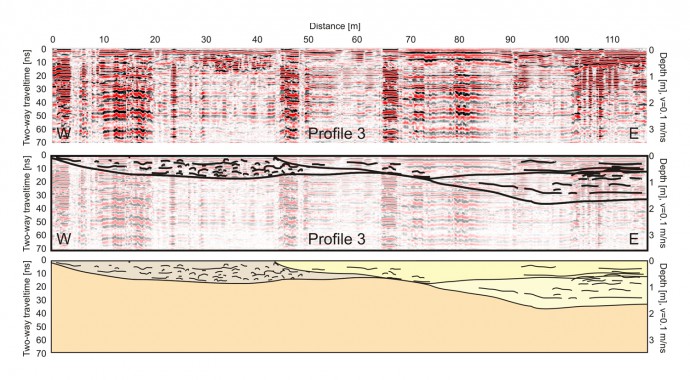 With the help of our great Omani students we recorded a dense grid of profiles that allowed us to build a 3D modell of the blackish, charcoal-rich unit that was found in the archaeological excavations. 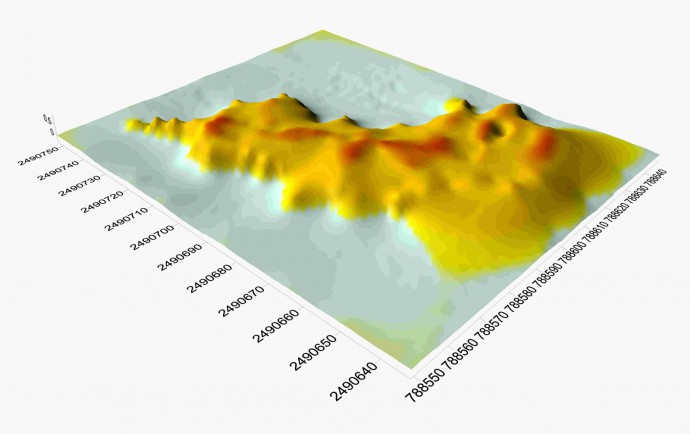 We also mapped the extent of small bronze age copper artifacts that we found at HD6. Interestingly, these artifacts concentrate where the black layer is present, too. Could they have been brought there by the same flood event, maybe while they were attached to floating objects…? Our datings together with the results from the archaeologists allow us to bracken the event to ~4.5 ka BP. We still do not know if it was a major storm or a tsunami, but it must have been some kind of extreme flood event. 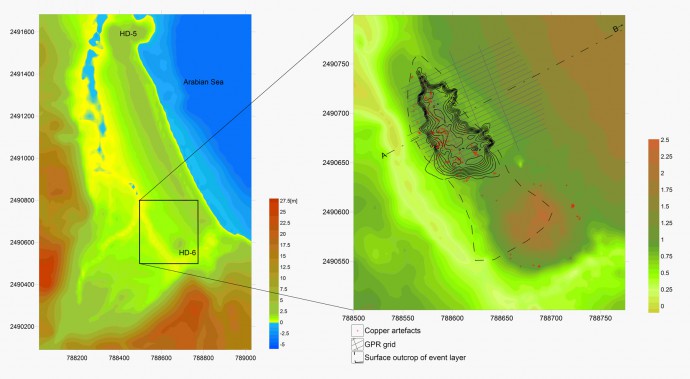 All data combined in one map.

Very recently, the two large cyclones Gonu and Phet hit Oman, and their wracklines are well-preserved in the vicinity. Obviously, these two cyclones, one of them the strongest on record in the Sultanate, were not able to cause the same level of destruction. Both storms did not re-distribute the sediments and archaeological remains of HD6. A very interesting point to note is that the occupation of HD6 continued after the event that we identified. The early Bronze Age community had developed resilience strategies and notably improved the building style when re-building the village.

If you like to read more about our research in Oman, check out our papers:

…and more images and reports at paleoseismicity.org:

…or watch this video of our field work: