An Indian Ocean tsunami triggered remotely by the onshore M7.7 earthquake in Balochistan, Pakistan, on 2013-09-24

On 24 September, 2013, a magnitude 7.7 earthquake occurred in Balochistan, Pakistan. The quake caused intense ground motions and had dramatic consequences – hundreds of people died, and more than 100,000 lost their homes. A secondary effect which caught much attention in the international media was the birth of an island off the Pakistani coast – Zalzala Jazeera or Earthquake Island. Another effect which went almost completely unnoticed was a small tsunami in the Arabian Sea. The tsunami reached wave heights of around 1 m at the Omani coast. In a paper which was recently published in Geology, my colleagues and me document the tsunami effects in Oman. We conclude on a submarine slide off Pakistan as the likely trigger mechanism.

Sea level data from the Northern Indian Ocean show distortions a few hours after the earthquake: 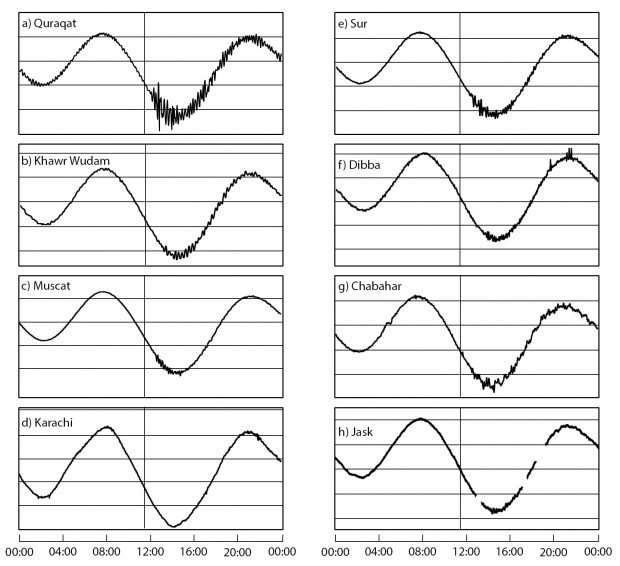 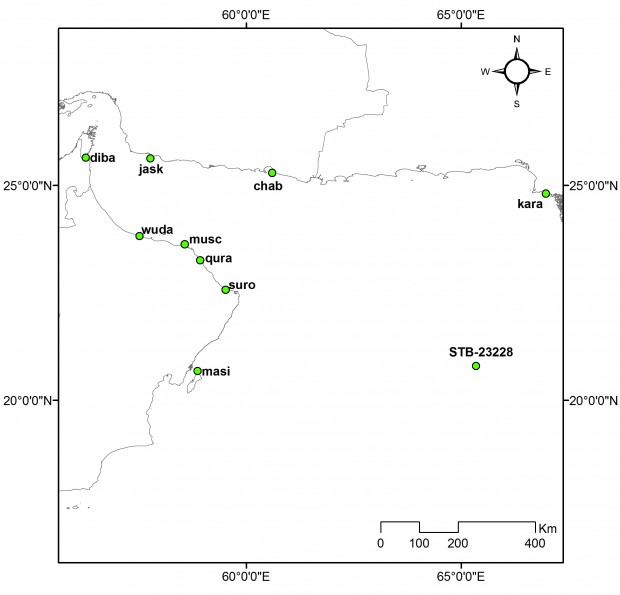 Also, a tsunami buoy in the Indian ocean recorded a disturbance few minutes after the earthquake. From the travel times it became clear that the tsunami buoy whose sensor is placed on the sea floor was affected by the seismic waves, but the sea level stations along the coast recorded a tsunami wave.

What caused the tsunami?

As the earthquake epicentre was located hundreds of kilometers away from the coast, a direct effect of ground displacement could be ruled out. Another observation was that the wave travelled from east to west, but was not registered at tide gauges east of the epicentre’s southward projection. This is a clear directivity effect which can occur due to submarine slides. There are two main regions that have both sufficiently steep slopes and soft sediments that can be mobilized by seismic shaking – the Owen Fracture Zone and the accretionary wedge along the Makran Subduction Zone (MSZ). Tsunami wave velocity is mainly controlled by the water depth, and our calculations showed that the MSZ is much more likely the source area. The birth of the island was very likely related to mud venting and can not have caused the tsunami as this effect was too slow.

In order to document the tsunami effects in Oman we interviewed local fishermen and asked if they observed any strange wave behaviour. The interviews followed the UNESCO-IOC International Tsunami Survey Team (ITST)
protocol. The eyewitnesses reported unusual waves during low tide, a change of water colour during the event, retreating sea before larger waves approached, strong currents they hadn’t observed before, and an unusual large amount of fish they could catch the next morning. The fishermen were so impressed by the spectacle that they recorded several videos:

What’s so special about this tsunami?

The earthquake itself is also subject to research, it seems to have a quite weird ripture mechanism. I recommend reading the papers by Avouac et al. (2014), Jolivet et al. (2014), and a very recent one by Barnhart et al. (2014) for more info on the rupture process and the tectonic background.