Guest blog by Yu Zhou (Oxford): The 2013 Mw 7.7 Balochistan earthquake in Pakistan: NOT SO UNUSUAL

In 2013, a MW7.7 earthquake struck Balochistan, caused a huge surface offset and triggered a small tsunami in the Arabian Sea. Immediately, the apparently strange fault behaviour caused the attention of scientists world wide and a number of papers were published. The discussion is highly interesting and still ongoing. This an interesting case for paleoseismologists, too, not only because of the cascading earthquake effects, but also because of the surface rupture distribution, from which we might learn some important lessons for our future work. Now my colleague Yu Zhou and his colleagues from Oxford University published a new paper on this event, arguing that it might be not as unusual as it seems. Their research is based on the analysis of Pleiades stereo satellite imagery, which has proven to be a very useful data source already. Yu send me a nice summary of his recent research:

The 2013 Mw 7.7 Balochistan earthquake in Pakistan: NOT SO UNUSUAL

The 24 September 2013 Mw 7.7 Balochistan earthquake in Pakistan is a very interesting event. It ruptured a 225-km long section of the curved and moderately dipping (50°-70°N) Hoshab fault whilst appearing to show consistent and predominantly strike-slip behaviour along its entire length, its slip vector rotating dramatically along-strike by 60°. 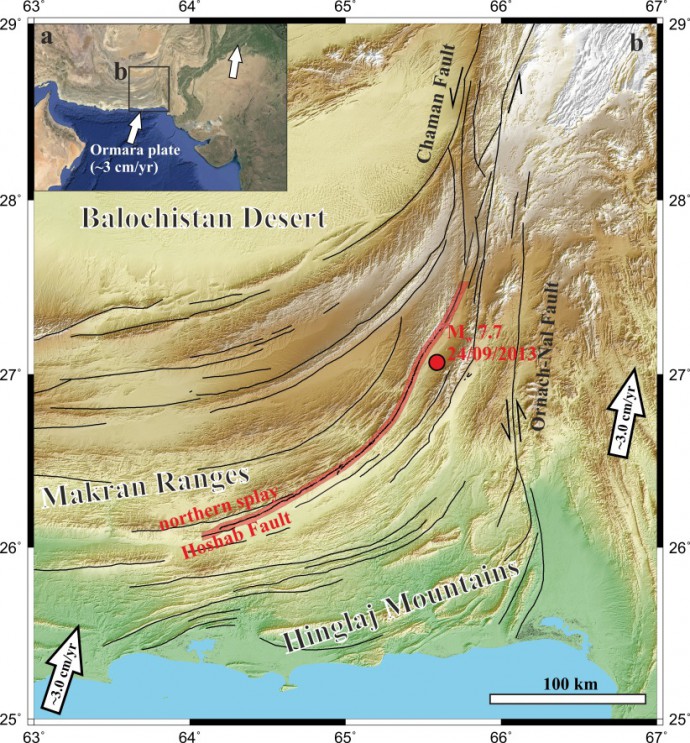 It is difficult to reconcile the largely strike-slip motion with the shortening to the west, which led to the argument that the fault kinematics switch between strike-slip and dip-slip motion in successive earthquakes (Avouac et al., 2014; Barnhart et al., 2015). Such kinematics is very unusual and has not been observed elsewhere. One way to test this hypothesis is to calculate the ratio of cumulative lateral to vertical displacements from past earthquakes. If the ratio of cumulative displacements is different from that in the 2013 event, it suggests that the fault kinematics do switch. The solution sounds simple, but field access is not possible yet.

Therefore we tasked Pleiades stereo imagery for the entire 225 km rupture and produced a 1-m resolution digital topography from it. By determining the vertical component of motion on the Hoshab fault for the first time, we found that the oblique motion in the 2013 earthquake is typical of this fault. A constant ratio of lateral to vertical motion over multiple earthquakes suggests that the Hoshab fault has experienced the same style of faulting throughout the Late Quaternary. 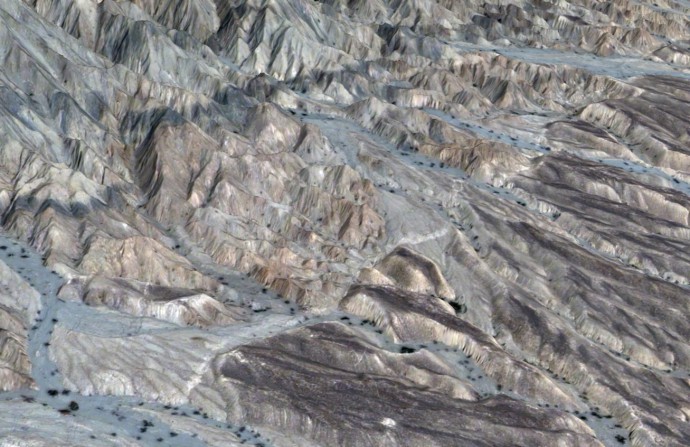 By further mapping of subparallel faults in the eastern Makran, we also show that failure occurs in a distributed fashion and is not constrained solely to the Hoshab fault, providing an explanation for long repeat times and hence a lack of seismic events in previous decades.

The Balochistan earthquake provides an example of distributed faulting in a remote and inaccessible area that has been made amenable to detailed near-field investigation by the new generation of very high-resolution satellite stereo imagery.

Yu works at the University of Oxford. He uses remote sensing data, especially Pleiades imagery and DInSAR, to find out about the accumulation and release of strain in the earthquake cycle. One of his main areas of interest is the Weihe graben, the southern boundary of the Ordos Plateau in northeastern China.

This research has been conducted in the framework of COMET, the Centre for the Observation and Modelling of Earthquakes, Volcanoes, and Tectonics, funded by NERC.