[Update 15 February 2017: Since Sascha is an author here now, the post was attributed to him.]
Greece is one of the main targets of RWTH Aachen’s Neotectonics & Geohazards group. They worked on paleo-tsunamis, active faults on the Peloponnese, in Attica, and on Crete, and on the application of terrestrial LiDAR and shallow geophysics for active tectonics research. In their latest paper, Sascha Schneiderwind et al. developed a methodology to aid paleoseismic trenching studies. They use t-LiDAR and georadar to better and more objectively characterise lithological units. His paper includes nice examples from Crete and from the famous Kaparelli Fault. Here is his guest blog:

Back in 2013, we did a nice two-week trip to Crete (Southern Greece) in order to investigate active normal faults spread all over the Island. Caputo et al. (2010) characterised and quantified many sites that evidence Middle-Late Quaternary and ongoing deformation within the Southern Aegean forearc.

Based on this publication we explored the major tectonic structures. These are typically of 4-30 km length and separate footwall Mesozoic Limestones, from alluvial and/or colluvial deposits in their hanging-wall. Even from distance, associated prominent and steep dipping bedrock fault scarps up to several metres height can be recognised by touring palaeoseismologists. During that journey we ended up in eastern Crete, or more precisely in Pachia Ammos close the Ierapetra fault zone. Its northeastern segment is formed by the NNE-SSW-trending Sfaka fault. 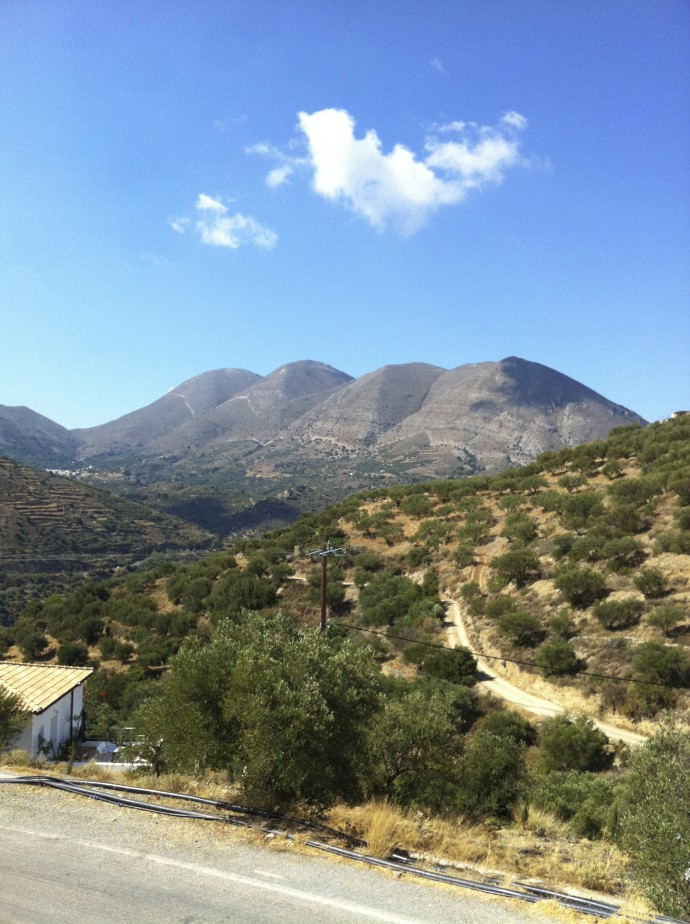 View on the famous Lastros Fault

Along strike of the Sfaka fault we found a road-cut that exposes the bedrock, the fault zone, and juxtaposed colluvial sediments – a palaeoseismic trench! Of course we did all the conventional stuff: cleaning, leveling, logging… But we brought also our GPR and TLS equipment with us and though why not use these for data collection as well?! So we scanned the trench and its vicinity and also carried out a GPR survey on the vertical wall. 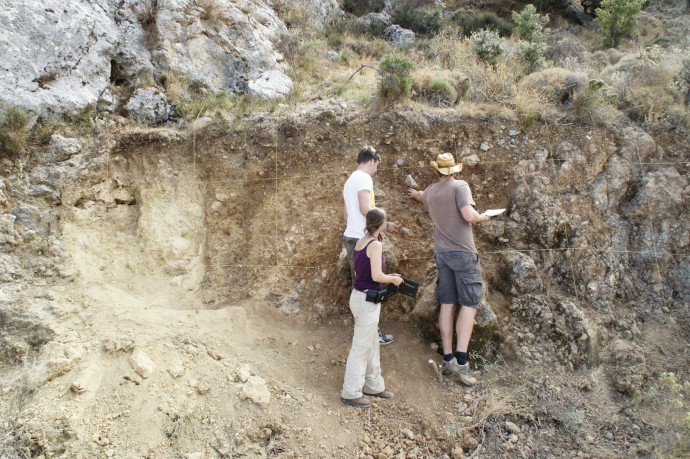 Back in the office I had a look at the data and started to combine the laser scans with data from GPR, and also georeferenced the log onto the digital model. Well, interestingly not much processing was needed to see correlations between the datasets and the idea was born to utilize TLS data for lithological layer distinction. Furthermore, the results from GPR enable to verify layer thicknesses etc. and thus allow fair estimates on palaeomagnitudes (Reiss et al., 2003). 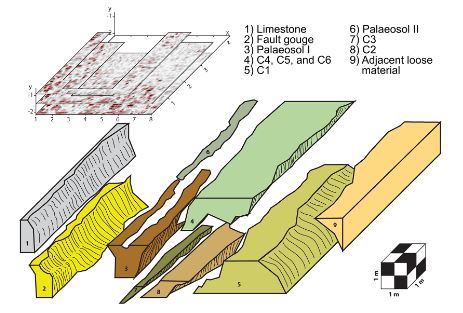 3D reconstruction of differing layers at the Sfaka road cut from GPR data.

In order to test the methodology we went to a professional palaeoseismic trench in central Greece, which was excavated by Kokkalas et al. (2007). The excavation is still open and exposes palaeosols and colluvial wedges. 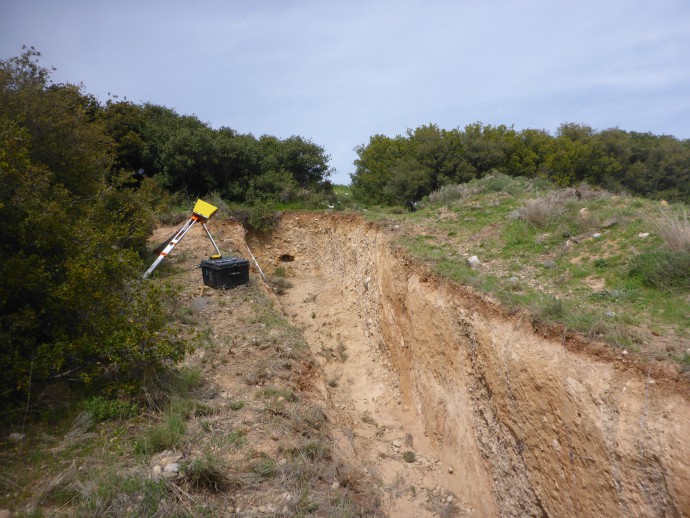 On the brink! Scanning the Kaparelli trench (Greece)

For multispectral analytics we combined backscattered near-infrared information from TLS with those from visible light. The result is a false-color image highlighting obvious parts and non-obvious features. Approaches from remote sensing (such as unsupervised classifications and similarity analyses) helped to link individual parts of the composition to the natural color photomosaic and manual trench log. 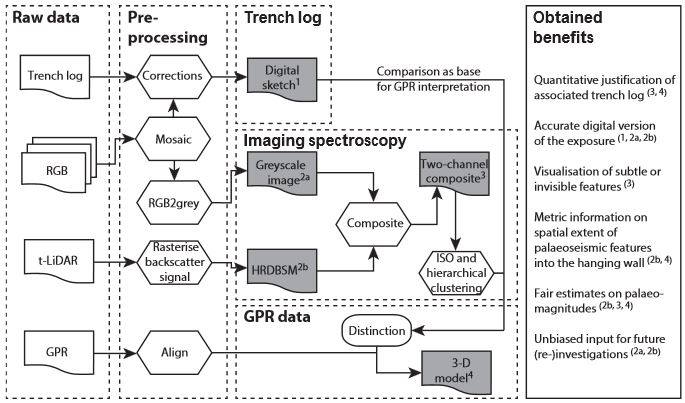 The classification seems to plot a data mess, but actually from zonal statistics we found out that distinct units can be distinguished by four options that characterise and differentiate between individual lithologies: 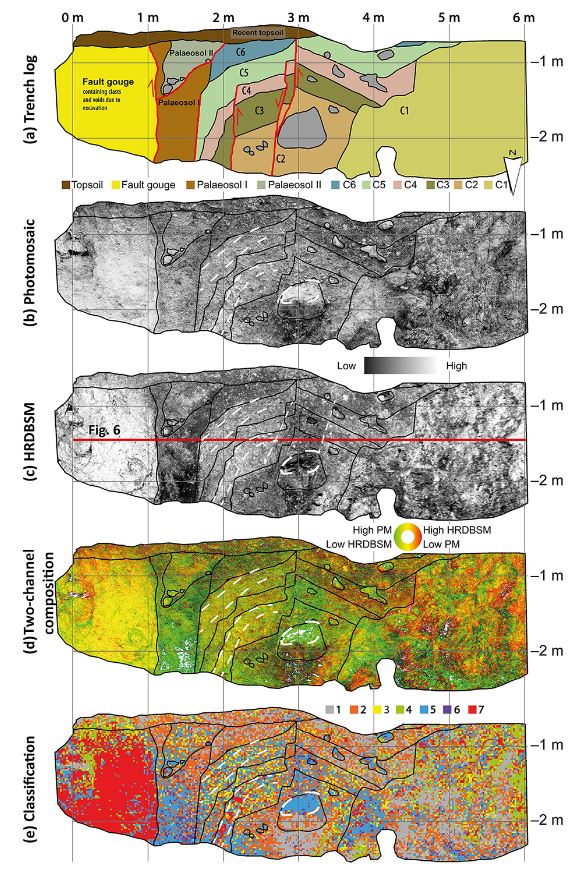 Beneficial from this method is that (young and unexperienced) palaeoseismologists can cross-check their sketching results and improve the trench log towards a more objective evaluation. Furthermore, the multispectral data sets are stored allowing unbiased input for future (re)investigations.