Surface faulting is commonly observed after moderate to strong (Mw > 6.0) earthquakes. Beside primary faulting along the seismogenic structure, distributed faulting (DF) may occur in the vicinity of the principal faulting (ANSI/ANS-2.30, 2015). DF may impact wide areas and its forecasting is particularly relevant for the design of critical or distributive infrastructures (e.g., nuclear power plants). DF assessment is currently pursued through probabilistic fault displacement hazard assessment (PFDHA): in this approach, the conditional probability of DF occurrence is computed as a function of magnitude and distance from the primary fault. Empirical regressions were obtained for the different tectonic styles, based on a limited number of case histories (e.g., Youngs et al., 2003 for normal faults).

In the last years, modern technologies captured DF with an unprecedented detail, and recent seismic events are the most complex ever recorded (e.g., Kaikoura 2016; Hamling et al., 2017). The 2016-2017 Central Italy seismic sequence is no exception, and a total of 43 km of surface ruptures were measured after the mainshock (Mw 6.5), occurred on October 30th, 2016. This was possible due to the huge effort undertaken by the Open Emergeo Working Group, coordinated by INGV (responsible: Paolo Marco de Martini) and comprising over 130 scientists from different countries. Results include a 1:25.000 map of the ground ruptures (Civico et al., 2017) and a database of over 7000 observation points (Villani et al., 2018).

We explore this exceptional database (Ferrario & Livio, 2018) trying to answer to the following questions: how geometry, lithology and structural setting drive the spatial distribution of surface faulting? Is DF of this event comparable to the empirical regressions of Youngs et al. (2003) and to previous events in the Italian Apennines? 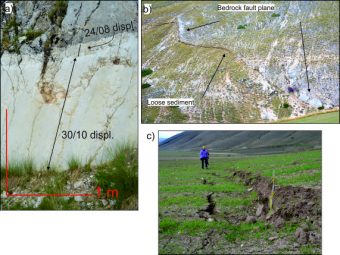 We analyze heave and throw for 5404 observation points, related to the primary fault (1723 points) and distributed faults (3681 points). DF accounts for 61% of the total throw; such a high percentage is common for structurally immature fault systems.

We evaluate the ground rupture distribution in space and partitioning of total offset between primary and distributed faults on a 14-km long transect in the Mount Vettore area. We describe a number of parameters, including i) throw pertaining to the primary, synthetic and antithetic faults, ii) the relative contribution by the different lithology classes, iii) the number of ground ruptures measured on stacked profiles perpendicularly to the primary fault, and iv) the rupture zone thickness.

We recognize different sectors, which led us to the definition of three structural settings having peculiar behaviors and faulting characteristics:

We thus believe that it is time to update empirical regressions, because they were developed from traditional field mapping methods only, which may have missed at least part of DF. We argue that the October 30th, 2016 Central Italy event can act as a reference for distributed faulting investigations. Modern technologies that complement field surveys with remotely sensed data (InSAR, Lidar, aerial photogrammetry) can better capture DF distribution and thus enhance DF-distance relations. In this sense, the availability of an increasing number of case histories will improve mitigation strategies.

Figure 2: Conditional probability of distributed faulting occurrence as a function of distance from the primary fault during all the earthquakes that generated surface faulting in the Italian Apennines since 1980.