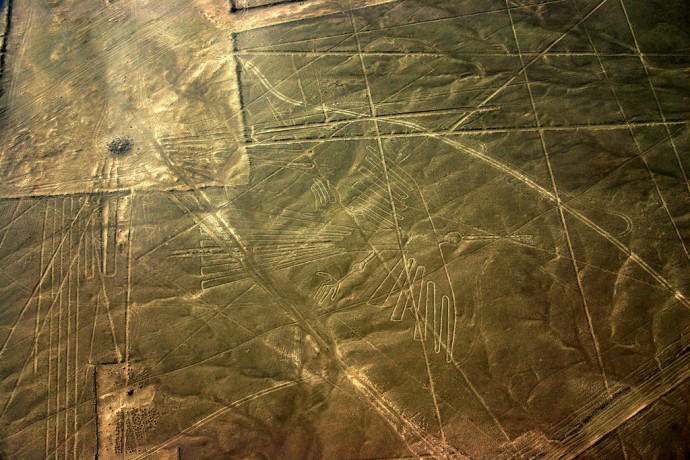 It really looks like a Photoshop hoax from the Onion, but it’s sadly true. The Nazca Lines in Peru, among the most amazing geoglyphs in the world have been significantly damaged these days. Although this already happened on Monday, I completely missed these news. So here is my Friday links addendum.

I was stunned and tremendously impressed when I first saw the Nazca Lines browsing Google Earth years ago (here, for example) and when I read the amazing story of the Nazca culture. These ancient people created these gigantic geoglyphs with huge perfect straight lines and various animals some 1350 to 1600 years ago to praise their gods sitting in the sky and/or as practices associated with water availability and crop growth.

And what does Greenpeace do? They wrecked one of the most sacred places in the Americas! I cannot believe that an so-called environmental organization is not able to think such an action through and to illegaly step on this cultural heritage and to damage it! They wanted to raise awareness for renewables (a noble enterprise), but they ignored that the access to the Nazca area is strictly limited and ignored the heritage they destroyed by shuffling over the Peruvian sacred ground.

Peru announced consequences and to prosecute Greenpeace. And a proper shitstorm, Greenpeace apologized.

Please don’t get me wrong, I dont’t demonize only Greenpeace. Well, maybe I should because they apparently don’t learn since it wasn’t their first backfiring incident. I just do not like that nature and cultural and natural heritage sites are needlessly damaged.

Do you remember that long discussion on rock-core damage earlier this year (here)? That happens everywhere. It’s not only political actionists, also people who really should know better are involved. There was an outrage some time ago in GMit, a joint publication of German geoscience societies, on outcrop damage from geomagnetics sampling. Or that sewage pipe story in the U.K. that started already two years ago and threatened Siccar Point, most famous for Hutton’s Unconformity? Geosite preservation in UT, USA was even a question in a defense I attended.

So be aware and raise awareness.

Have a nice weekend.