A short week full of Christmas events and defenses and farewells has passed here at my university, so this round-up is also to remind myself what I’ve missed… Today is Friday and here are your links!

Starting with a recent disaster: Last Friday at around six o’clock (local time), a massive landslide struck Banjarnegara in central Java and buried some 100 houses afer days of repeated heavy rain. The number of fatalites rose from day to day and now adds up to a shattering number of 83. Dave Petley found some amazing but also disturbing video footage uploaded to Youtube (chaos and panic, be prepared). As you also can see in the video, the Banjarnegara landslide has been highly mobile. Java is very prone to landslides as the topography offers steep slopes, the soils are highly susceptible towards landslides and heavy rain is very common.

As far as I can see the slide has occurred indeeply weathered residual soil, with no evidence of bedrock, or a bedrock – regolith contact, in any of the images that I’ve seen. I wonder if this was a static liquefaction type process to generate the exceptional mobility.  An alternative might be an undrained loading process generated by an initial failure near to the crown of the landslide, which would also explain the mobility, although the depth of the failure surface might be harder to explain.
Dave Petley 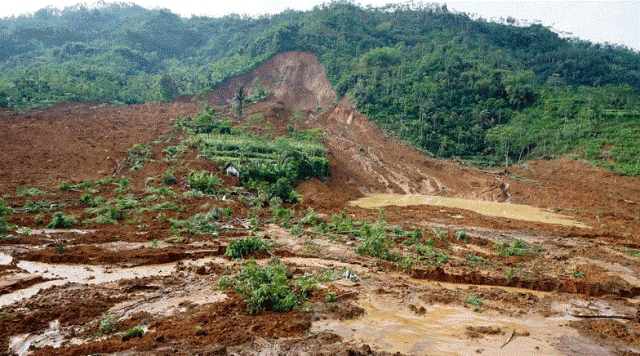 Speaking of southeast Asia: Julian, who is involved in a 5 year project to reduce the risks caused by natural disasters in Indonesia, wrote a nice post on Disaster Risk Reduction in Indonesia including some nice field trip photographs.

Following the 2011 Virginia Earthquake, that had a magnitude of 5.8 at 6 km depth and a perceived MM intensity of VII, the USGS have now pinpointed the origin point of the earthquake. Airborne geophysical surveys (gravity, magnetics) combined with aftershock data revealed a zone where two or several faults intersect (or join).

These surveys unveiled not only one fault, which is roughly aligned with a fault defined by the earthquake’s aftershocks, but a second fault or contact between different rock types that comes in at an angle to the first one. This visual suggests that the earthquake occurred near a ‘crossroads,’ or junction, between the fault that caused the earthquake and another fault or geologic contact.
Anji Shah, USGS

When historians and geophysicists team up, they might be shuffling over a cemetery, like they did quite recently near Houston, TX. They used GPR to scan the ground for unmarked graves at Mueschke Cementery, a historical burial ground. But as I know from my colleague Sascha, scanning for unmarked graves or burial plots is not always crowned with success even if you find positive results in your GPR interpretation… there’s always room for somebody dumping and burying demolition waste.

Following that social media outcry on Greenpeace’s actions last week, there is another blog post (Garry Hayes, Geotripper) worth reading.

Watch this video of a total cloud inversion that filled Grand Canyon National Park. This time-lapse of 15 minutes shows dense fog close to the ground held in place by a overlying high pressure zone.

I came across this great geological map of the Arctic which is really fun exploring, published already in 2011 by Harrison et al. from Natural Resources Canada. Verdad, io9 (ht), it makes a neat wallpaper.

And here is what all our paleoseismicity.org authors posted on our Facebook and Google+ walls this week:

Tiny grains have a huge impact – scientists from Utrecht University have discovered a mechanism that triggers earthquakes. Their findings were published in Science.

Dave Petley wrote about their latest publication on the relationship between landslide occurence and distance from a shaking fault, following the 2010 El Mayor-Cucapah earthquake on The Landslide Blog.