Today is the 200th anniversary of the first event of the New Madrid Earthquake Series. There’s still an open debate on magnitudes, intensities, causative faults, recurrence intervalls and the implication for seismic hazard. Several websites and blogs have nice posts, among them:

Retos Terrícolas started a nice article series on the Messinian Crisis, including videos on how the Mediterranean dried out. The reason is a recent Nature article:

It shows some differences to what I know from the literature, especially when it comes to the last open connections from the Atlantic to the Med, but the animation is nice and well done.

Matt from Agile* has prepared a useful cheatsheet on petroleum geology for his lecture in Dalhousie University. You may download it here.

The Foo Fighters have rocked Auckland – literally! Their fans created a tremour which was recorded by the Auckland GeoNet seismic network. GeoNet has the seismogram: 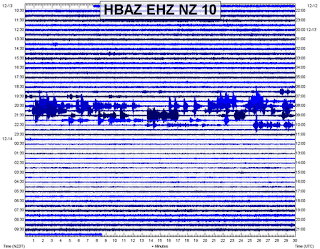 The seismogram shows the tremour caused by the Foo Fighters. Image courtesy: GeoNet

Is there really a North-American plate? Maybe not, according to Allan Krill.

Google StreetView has amazing images from the area that was hit by the Tohoku Tsunami. You can compare images before and after the tsunami and see the enormous devastation. Really impressive and also valuable for science.

EARTH magazine reports that there are geoscience jobs for everyone, everywhere. Good news for students.