From May 8 – 13, 2015 the 4th International Symposium on Mega Earthquake Induced Geo-disasters and Long Term Effects was held in Chengdu, China, at the 7th anniversary of the Mw 7.9 Wenchuan earthquake that occurred on May 12, 2008. Since Chengdu was basically on my way back from the Fucino 2015 PATA Days in Italy to my working place in Beijing, I was in the lucky situation to be able to participate the symposium and drive away the post-PATA-blues with exciting talks, discussions and field trips that obtained a new dimension of relevance in face of the April 25 Nepal earthquake. I thought this meeting might be interesting for the paleoseismicity community and as Christoph told me, the current example of the Nepal quake that apparently didn’t produce any surface rupture shows again the importance of earthquake environmental effects (EEEs) for paleoseismologists. So I decided to put together a little report about the symposium and in a coming post I also want to share a report and some pictures from the post-symposium field trips.

The symposium was hosted at the facilities of the State Key Laboratory of Geohazard Prevention and Geoenvironment Protection (SKLGP) within Chengdu University of Technology (CDUT) and I think that everything was organized perfectly with a lot of commitment, so thumbs up for the organization team! I want to note here that the SKLGP has the most amazing geotechnical lab I have ever seen. They have a huge centrifuge that extends over two floors where earthquake shaking can be simulated under centrifugal acceleration conditions. They have numerous large sandboxes where earthquake shaking can be simulated and very high and long slides to simulate debris flows (yeah, working with mud and rocks!). 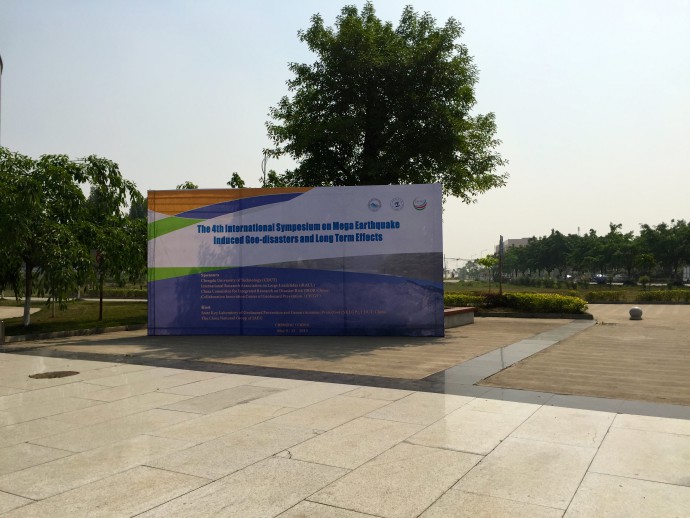 One of several great banners that were put up everywhere on the CDUT campus, quite impressive.

Since there were 66 oral presentations, including 14 keynote lectures and 22 invited lectures given by experts from 13 different countries I will only try to give a brief overview of the topics and highlight some issues that I found most interesting.

After the opening ceremony and the obligatory group picture the symposium started with a very inspiring keynote lecture given by Mauri McSaveney from New Zealand, who spoke to us as a “geohazard shaman” who’s job it is to “make people feel better in a geohazardous world” and appealed to us to ask ourselves what our common objective is when starting in this meeting or in our research in general – risk reduction, cost reduction or loss reduction? The next key notes were given by Yueping Yin from China about geohazard prevention and reconstruction after the Wenchuan earthquake, Alexander Strom from Russia about patterns of possibly paleoseismic large bedrock landslides in the Tien Shan and Cees van Westen from the Netherlands, who presented a promising model for the near real-time prediction of coseismic landslides and who is looking for more landslide inventories for the calibration of this model. After lunch there were two parallel sessions of invited lectures and then two parallel main sessions. The main topics of the talks were descriptive reports about earthquake induced landslides and cascading effects, modeling and experimental approaches for different degrees of hazard and risk assessment and mitigation strategies for the prevention of earthquake induced disasters.

The group picture. Photo from SKLGP.

Sunday started with the keynote lecture everybody was excitedly awaiting given by Qiang Xu from the SKLGP who had just returned from the field, where he was looking for geohazards induced by the April 25 Nepal earthquake in China. He reported about several landslides along the two major highways connecting Nepal and Tibet and a village that had been evacuated and he discussed why he thinks that less landslides may be expected from the Nepal earthquake than from the Wenchuan earthquake, which induced more than 60000(!) landslides. After keynotes given by Toshitaka Kamai from Japan about earthquake induced landslides in urban residential slopes and Ken Hewitt from Canada, who was reporting on disaster risk in the Nanga Parbat-Haramosh Syntaxis and several invited lectures, another keynote session was scheduled in the afternoon. Here the highlight was of course the talk of landslide superstar Dave Petley, who reported about the landslide mapping activities after the Nepal quake before he started his actual lecture on the setup of a dynamic back-pressured shear box experiment. But also the lectures of Charng Hsein Juang from the USA, who talked about uncertainty in probabilistic hazard assessment and Hans-Balder Havenith from Belgium, who introduced his work on a Tien Shan wide landslide inventory mapping and susceptibility analysis were fascinating. The Sunday keynotes were closed by Xuanmei Fan from the CDUT who gave a review of seven years of post-earthquake disaster research and pointed out research gaps, which are especially related to quantitative hazard assessment for prediction, the role of cascading effects of geohazards and long term post-earthquake topographic evolution and sediment flux. The day ended with further main sessions focusing on the above mentioned topics. 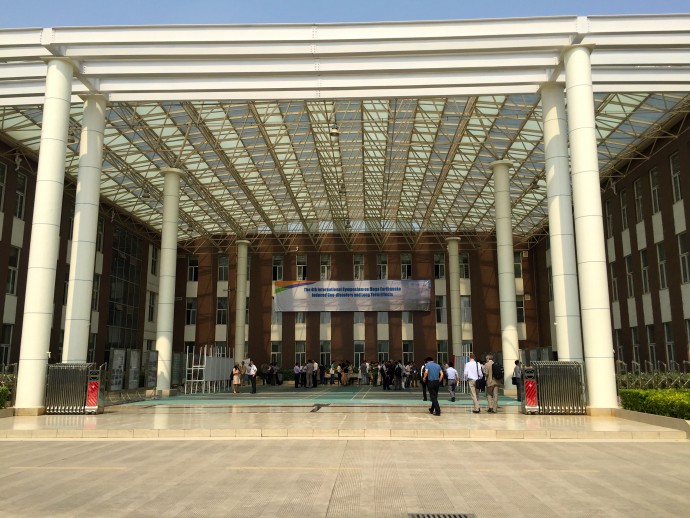 Coffee break in the shade in front of the SKLGP building. Unfortunately without Italian espresso.

The last symposium day started with a very illustrative keynote lecture on landslide dams in the Indian Himalaya given by Yogendra Deva from India and another keynote by Masahiro Chigira from Japan on earthquake induced landslides in the ring of fire, which are quite unique due to the pyroclastic material in these areas. Chyi-Tyi Lee from Taiwan gave another interesting keynote about debris-flow modeling after a major earthquake. After another parallel main session Runqiu Huang, the director of SKLGP, gave a worrying last talk of the symposium on the response of landslides and GLOFs in eastern Tibet on global change.

After lunch the remaining experts and participants gathered together for an intense general discussion that went on for about three hours I think. I want to stress one issue here, which is the definition of “long-term” effects of earthquakes. There seems to be no consensus in the scientific community yet, maybe it was also not really thought through before. Can we fix this somehow on a time-scale or maybe in a causal chain? What about cascading effects, like debris-flows fed by coseismic landslides that are triggered years later by rainfall, as I will show in my next post? Are those still EEEs? Can they be used for environmental seismic intensity (ESI) scale estimations? Maybe if you back-calculate coseismic landslide volumes from the debris volume in the given catchment area? As I learned in the symposium there exist already powerful models to estimate debris flow volumes from landslide volumes, so why not model it the other way round?

The discussion went on about the societal aspects of hazard mapping, if the progress of hazard and risk mapping has already led to a decrease of losses, how we could convince planners to use our maps, which is most probably a question of communication and politics, and how useful risk mapping in general and a national framework for risk mapping in particular would be. It seems to me that in China the risk reduction strategies are starting to work out by now, but the lesson that had to be learned was a tough one.

Another important part of the discussion was about the International Research Association on Large Landslides (iRALL with a fancy lower case i to attract young researchers, which I find a nice idea) who wants to establish a global database of large landslides, which I think is a very interesting and useful thing to understand more about the global pattern of large landslides. So if you have any data of large (paleo)landslides anywhere in the world and would like to share it, the iRALL people would be very happy to hear from you. Contact me, I will connect you.

So far from the symposium. Stay tuned for more information about the post-symposium field trips, which led us to a giant debris-flow and the Wenchuan earthquake epicenter.