Together with my colleagues I have published a new paper in which we describe a methodology for mapping the shallow architecture of large sedimentary basins with minimum effort and high resolution. We use two geophysical methods and combine them with point information from shallow drillings to identify different types of alluvial, fluvial, and aeolian sediments in the Orkhon Valley in Mongolia. We then show that our results fit well with a remote sensing approach. Although we did not target active faults in our study, the methodology is well suitable for detecting deformed/offset sediments without surface expression due to high erosion or sedimentation rates. That’s why I feel the study is of interest for the fault-hunting community.

Mapping the sediment distribution in the shallow subsurface is not that difficult. Georadar has a high resolution of up to a few centimetres (depending on the antenna frequency that you use), but its penetration depth may be limited by wet or clay-rich sediments. Geoelectrics (the ‘classic’ 4-point-method) reaches much deeper, but with less resolution. While georadar is a mobile device, the classic geoelectrics method relies on electrodes that you stick into the ground. Covering long profiles or large areas is therefore time-consuming. Shallow drillings are of course the method of choice, but again you can sample only a few points. Now what if your study area is really large, say, tens of kilometres by tens of kilometres? Our study area, the Orkhon Valley in Mongolia, was that large. With the classic geoelectrics we would have spent ages to measure only one transect across the valley. Georadar did often not work well because of clay layers at the top. 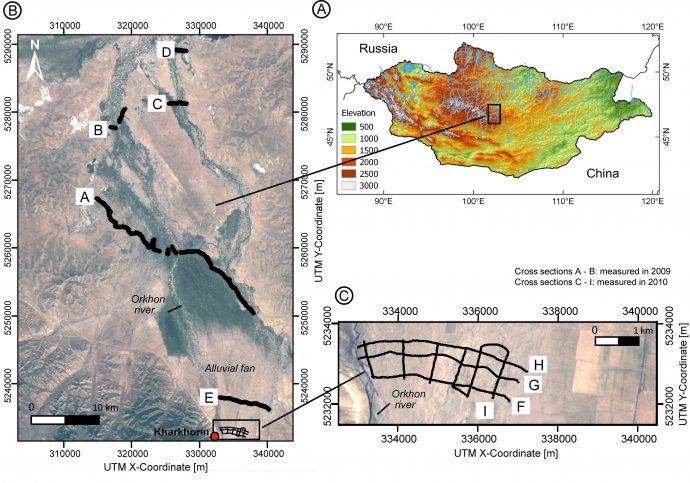 Our study area, the Orkhon Valley.

I have worked in similar settings for the past three years. For example, the Ili Basin in Kazakhstan is really huge, and we suspect that there are at least some active faults at work. Most of them do not have a surface expression because sedimentation outpaces the tectonic uplift/deformation (cf. Grützner et al., 2017), yet we could possibly find them because they offset and juxtapose different sediment layers. There is an obvious need for a methodology that would combine high resolution data with the ability to cover long transects or large areas. In the case of our study we were interested in the paleo-environmental conditions in the valley and we used the sediment distribution as a proxy for landscape changes (Grützner et al., 2012). The area has a turbulent settlement history and the city of Qara Qorum in the south of our study area was once the capital of one of the Mongolian Empire. 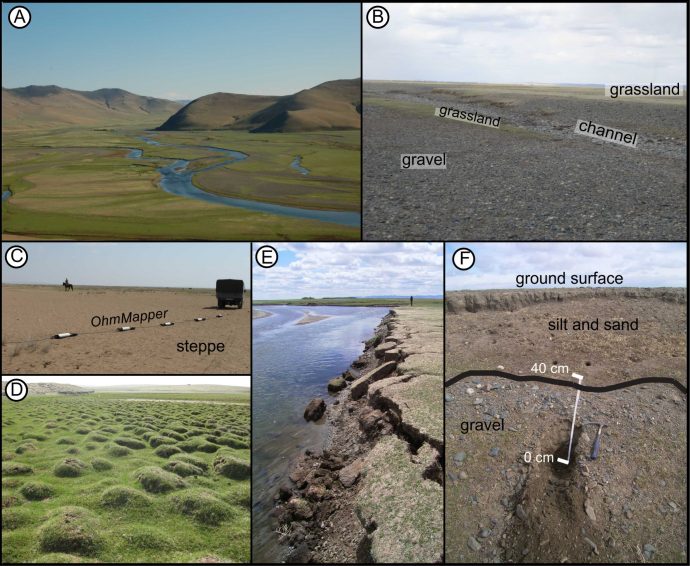 We used a standard georadar device with 270 MHz and a survey wheel. This system can be easily pulled by a single operator, and you can cover tens of kilometres per day because you can basically move around at walking speed. In order to overcome the penetration limits of the georadar we used a mobile geoelectrics device, the OhmMapper. This one is quite heavy, so we pulled it with a 4×4. The combination of both methods allowed us to gather tens of kilometres of transect data within less than two weeks of field work. Plus, Riccardo Klinger did some shallow drillings and employed a classification of the surface sediments based on remote sensing data (Klinger et al., 2011). 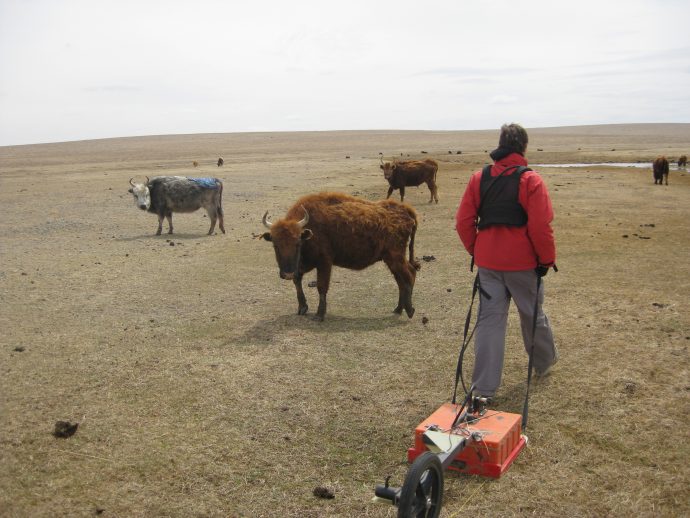 Me pulling the georadar. 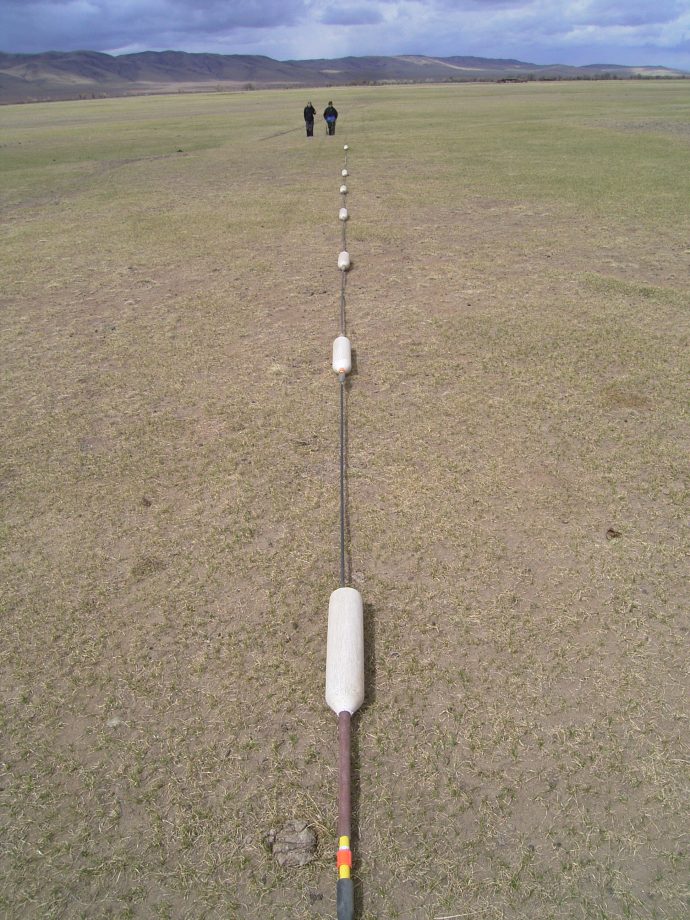 The OhmMapper pulled by a car.

We first analysed the geoelectrics data following the approach of Neukirch & Klitzsch (2010) because the OhmMapper is a relatively exotic device and data processing needs some special attention. The data reveal the distribution of the electric resistivity in the subsurface. We assigned ‘resistivity units’ (RU) to characteristic patterns. In the second step we looked at the georadar data of exactly the same profiles. With their higher resolution, the data allowed to refine the RUs and we introduced ‘geophysical units’ (GU) based on the joint interpretation. The third step was to calibrate these GUs with the point information from the shallow drillings. By doing so we could translate the GUs into actual sedimentary facies (flood plain deposits, alluvial fan sediments, channel fills etc.). Since our profiles covered the entire valley in a number of transects, we were able to produce a large-scale map of the shallow sediment distribution in the Orkhon Valley.

The geophysical data allow us to identify characteristic sediment patterns.

Are we sure we got it right?

Yes, and we have a good reason for this assumption. Klinger et al. (2011) worked with satellite data and a supervised classification procedure to remotely map the occurrence of different landscape classes in the valley. While one might throw in that the ‘landscape’ is somewhat independent from the sediment distribution in the shallow subsurface, there is quite a close connection if you think about it. ‘Landscape’, such as ‘grassland’ or ‘dune’, depends on the availability of water as well as on the slope and the grain size of the substratum. It is therefore not surprising that we found that our units (the GUs) more or less correspond to certain ‘landscape’ classes that Klinger et al. (2011) identified. That was a pretty neat result and it shows that our method can indeed be used to investigate very large areas with reasonable effort and great resolution.

Comparison of our results with the landscape classification of Klinger et al. (2011).

This research wouldn’t have been possible without…

This work was financed by the Federal Ministry of Education and Research (01UA0801C) (BMBF) project ‘Geoarchaeology in the Steppes – Reconstruction of Cultural Landscapes in the Orkhon Valley, central Mongolia’, led by Jan Bemman. We are grateful to our students Jasmin Blomeyer and Sebastian Storandt who helped with the field work as well as to our colleagues from the Mongolian Academy of Science for their support. A special thank you goes to Birte Ahrens and Henny Piezonka who took the burden of organizing the field campaigns. We thank our Mongolian drivers who mastered the most difficult terrain. 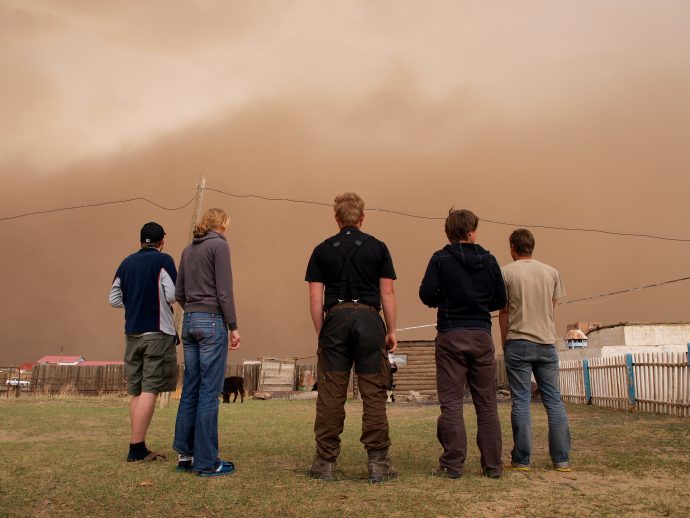 Waiting for the cars to be repaired.