We published a new study dealing with paleoseismological work on the Milesi Fault near Athens, Greece. A slip rate was estimated based on GIS work, mapping, and trenching. Four surface-rupturing earthquakes in the last 4-6 ka were found, and we estimate magnitudes of around M6.2. With these input parameters, we developed a seismic hazard scenario that also takes into account site effects. Our results show that the official seismic hazard zonation in Greece, which is based on instrumental and historical records, contradicts geological data. We also show that extension in this region is not only confined to the Southern Evoikos Gulf graben system, but a significant amount of extension is accommodated by active faults closer to Athens. 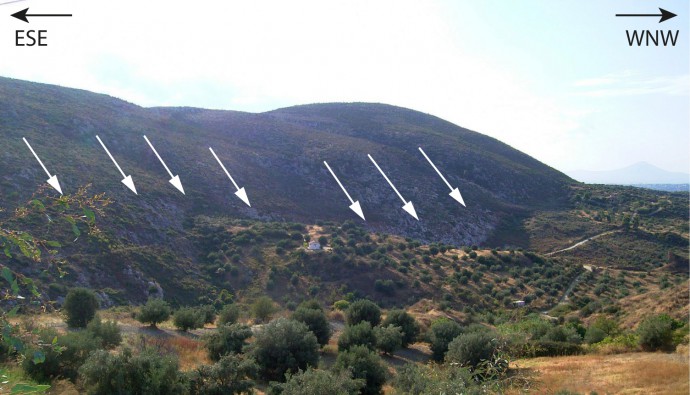 The Milesi Fault plane crops out west of Milesi village.

Extensional tectonics prevail in northern Attica, accommodated by normal faults parallel to the Southern Evoikos Gulf graben system. A number of WNW-ESE striking faults with lengths of 5-15 km control the morphology, and post-glacial fault scarp can often be found in the limestone foot walls. Typical slip rates are estimated to be around 0.3 mm/a. We concentrated on one of these faults, the Milesi Fault. The reason for this is that most paleoseismological studies focus either on well-known faults or on faults where recent earthquakes took place. We wanted to show that it is possible and necessary to retrieve data from other, often overlooked structures as well, and that these data do not only help to understand the active tectonics, but also to better estimate the seismic hazard. 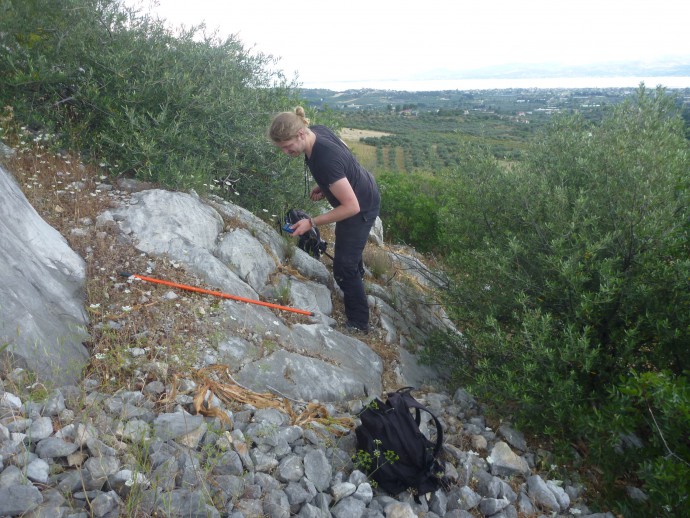 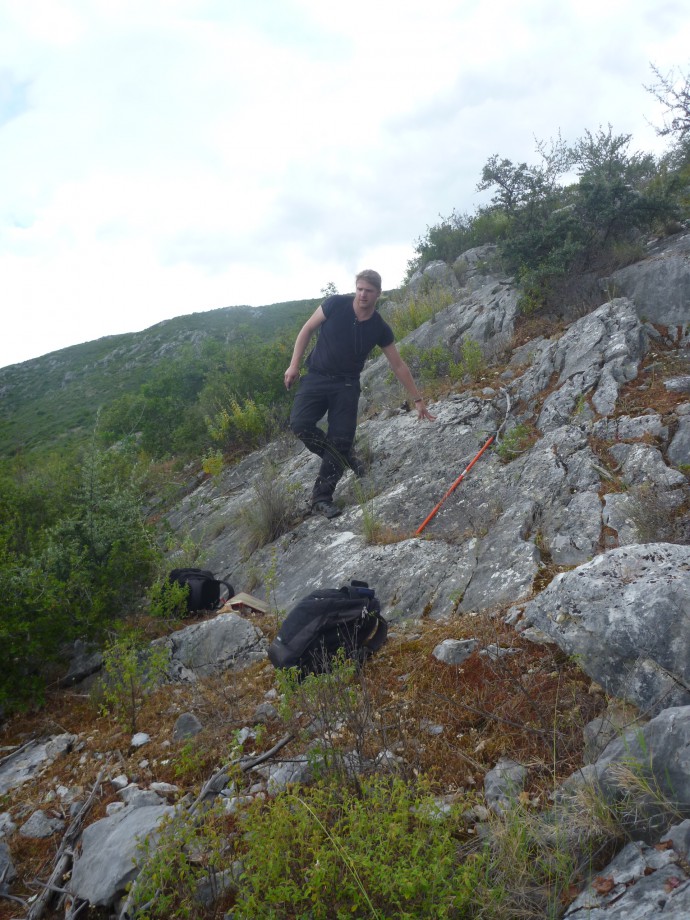 Sascha in front of the scarp.

A GIS analyses was used to measure the fault throw and to identify suitable trenching sites. We mapped the fault along its entire length and measured scarp heights. Georadar (GPR) was applied in order to find promising sites for an excavation, but the results were poor. In the centre of the fault, where the throw was found to be the largest, we enlarged an existing outcrop for a paleoseismological study. The trench was cleaned and gridded and described in detail. Unfortunately, heavy rains forced us to stop the work several times and our study site turned into a shallow lake which we had to drain before we could continue. However, it was worth it! 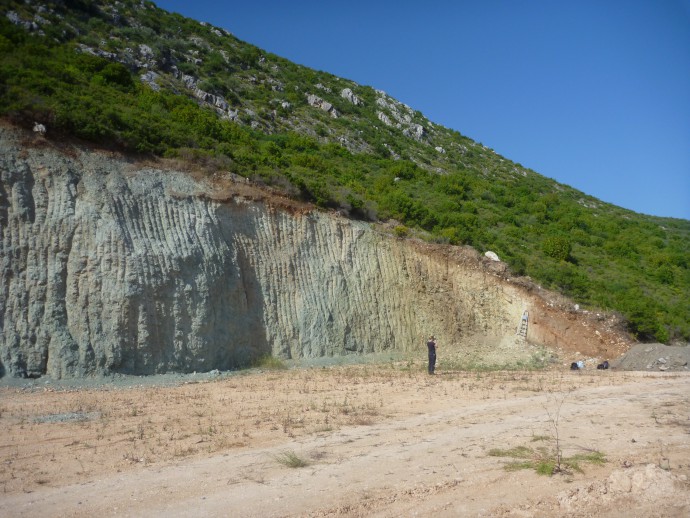 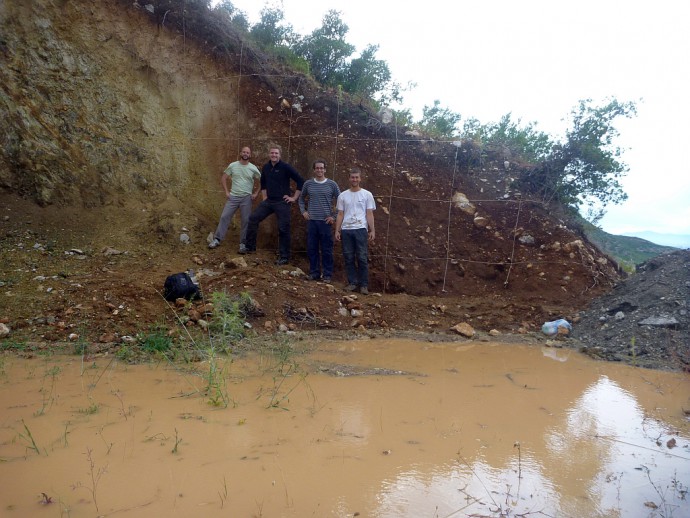 Trenching in the rain. 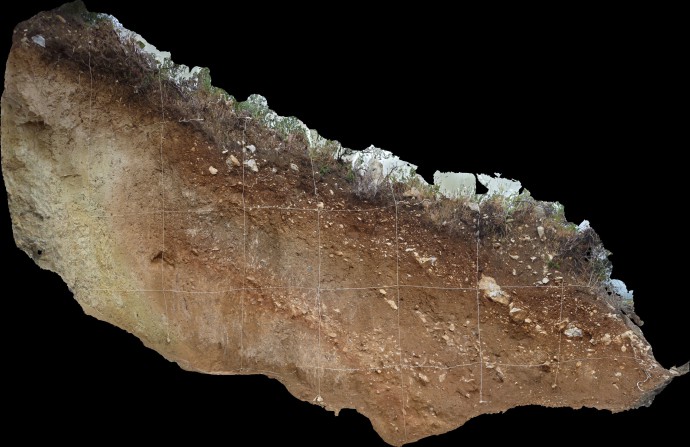 Downthrown paleosols allowed us to reconstruct the slip history and to date the event horizons. We identified four surface rupturing earthquakes in the past 4-6 ka, with estimated magnitudes around M6.2, based on throw and fault length. The most recent event happened after 1.8 ka BP, but we found no historical record that would match. Greece has a quite good historical record of large earthquakes. For example, we know that Athens did not suffer major damage due to earthquakes since more than 2000 years. The city was, however, affected by shaking from distant events like the 1981 Gulf of Corinth earthquake series. In 1999, a moderate local event caused 143 deaths and $3 billion of damage in Athens. These were dramatic consequences, but given the population and the building structure, things could have been much worse. A problem is that the epicentral location of historical quakes is often poorly known and that they can not be ascribed to a certain fault in most cases. One would think that at least the instrumental earthquakes have good locations, but even recent events often have error bars of several kilometres – too large for an area which is littered with active faults. 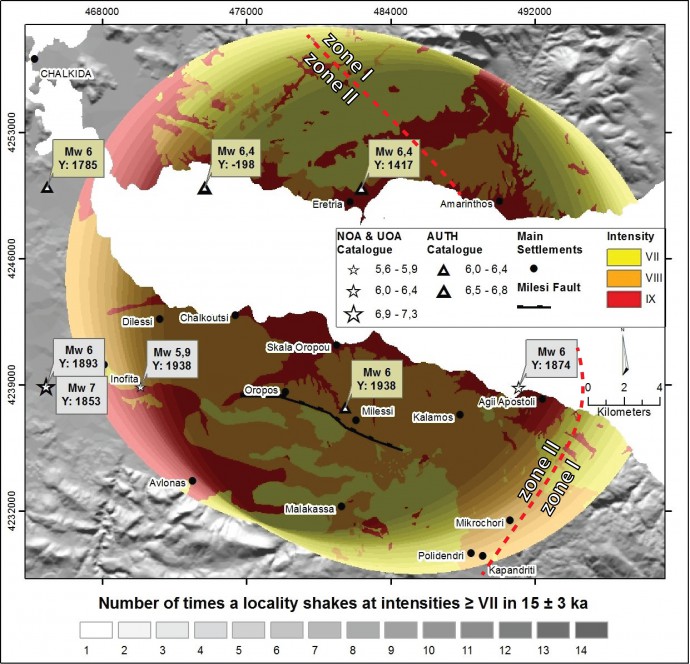 Our earthquake scenario shows that this area will experience
intensity IX from the Milesi Fault every 1070 ± 220 yr.

We used our findings to develop an earthquake scenario using a fault specific approach. We calculated the recurrence intervals for strong shaking from the Milesi Fault, taking into account local amplification effects. Our map presents a locality specific shaking recurrence record, implying that the area is likely to experience
intensity IX from the Milesi Fault every 1070 ± 220 years. This contradicts the official seismic hazard zonation, in which the boundary between seismic zones I and II crosses our study area. From a geological point of view this is not justifiable. 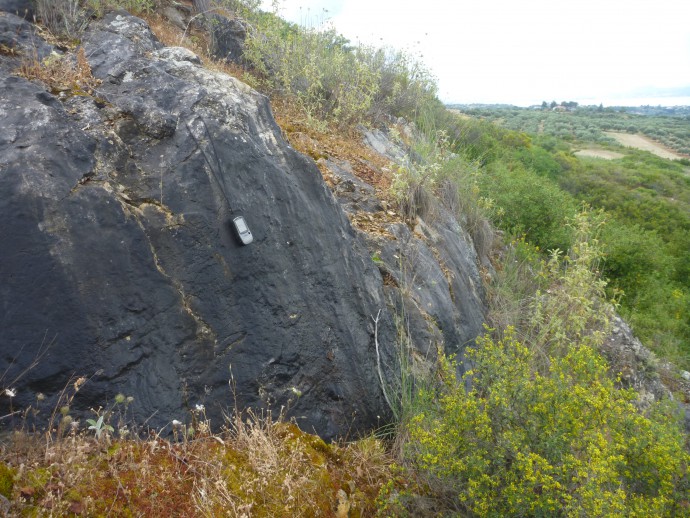 What does it mean?

Our study illustrates that paleoseismological studies combined with mapping, remote sensing, and near-surface geophysics can be applied to rather small structures of which little is known. (OK, geophysics didn’t work in our case, but we tried…) It became clear during the last few years that these rather short active faults pose a major problem, because they often have long recurrence intervals and are not properly incorporated in any risk assessment. We see the quakes 2009 in L’Aquila (Mw6.3), 2011 in Lorca (Mw5.1) and 2012 in the Emilia-Romagna region (Mw5.8) as a warning, and here we show that it is possible to understand and assess these faults.

Our data also shed light on the distribution of normal faulting in Attica. Here, a set of sub-parallel normal faults shares the extensional motion. In many other settings we find that fault activity migrates towards the hanging wall and that the faults closest to the graben centre are the active ones. In our case the graben is the Southern Evoikos Gulf and most of the faults onshore seem to have seen Holocene earthquakes. Also, the slip rate of the Milesi Fault appears to be somewhat higher than thought before. 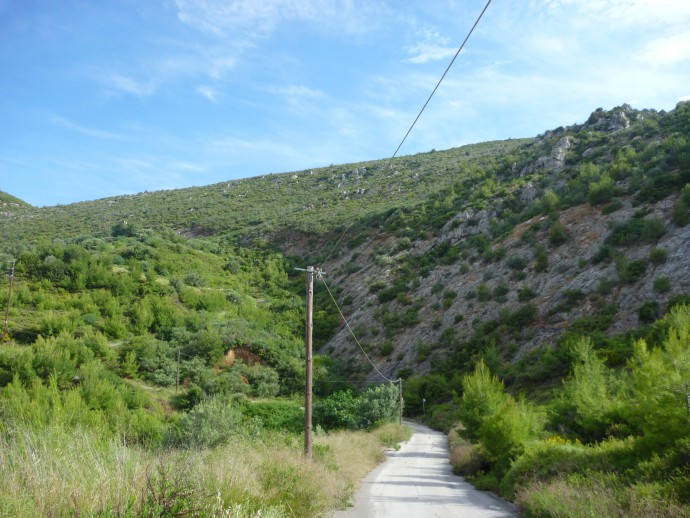 The fault is exposed close to a wind gap.