Large landslide in the epicentral area of the 1889 Chilik M8 Earthquake, Kazakhstan

A large landslide occurred in SE Kazakhstan near the town of Saty (Саты), TengriNews.kz reports. The slide is about 900 m wide, 1700 m long, and has an estimated volume of ~50,000,000 m³.   Apparently nobody was harmed, but the now slow-moving landslide mass approaches Kolsai river. The road to Kolsai lake (a landslide lake) is blocked. Images and videos from the area show what may be a thick layer of loess that moved downhill after heavy rain.

From GoogleEarth imagery it is clear that this is a reactivated landslide in an area that has plenty of slides: 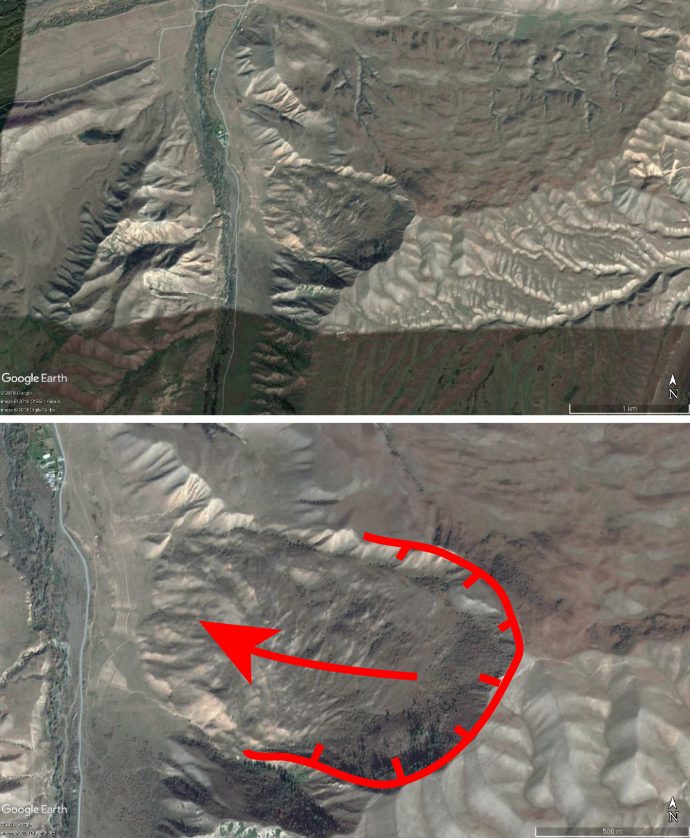 GoogleEarth imagery from 2010 shows many different landslide generations. The slide of 19 April, 2018, reactivated a rather fresh-looking slide on a W-facing slope, probably in loess.

Austin Elliott allowed me to use one of his field photos that shows the slide in the background: 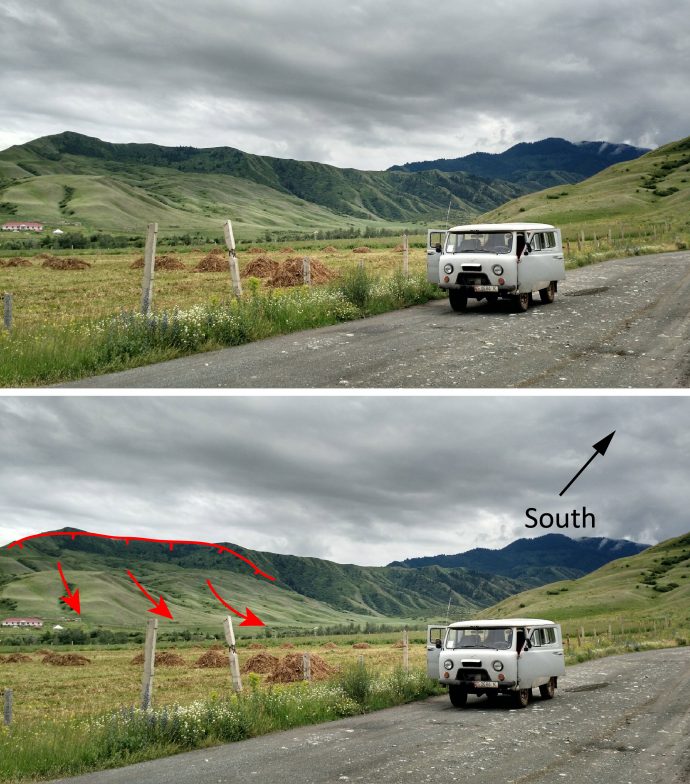 The interesting thing from an earthquake perspective is that this is the epicentral area of one of the strongest historical earthquakes that ever happened in the continents. The 1889 Chilik earthquake had a magnitude of Mw8.0–8.3 (Bindi et al., 2014; Krüger et al., 2015), and caused ∼175km of surface ruptures in the Chilik River valley (Crosby et al. 2007; Abdrakhmatov et al., 2016). The surface ruptures are quite spectacular and reached several metres of offset. 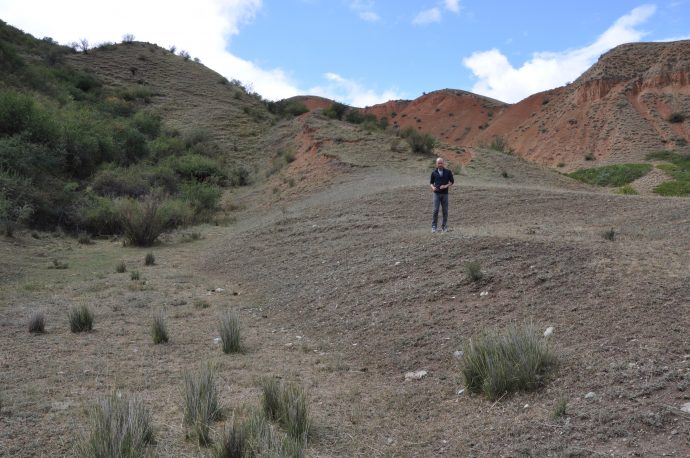 Austin Elliott on the fault scarp, 126 years after the earthquake.

The fault crosses the channel and the ridges.

From the few historical reports it is known that the shaking was severe, but little is known about the effects of the quake on the environment – the report by Mushketov (1891) is solely based on macroseismic questionnaires and not on field work. No surface rupture was reported back then, and no other effects such as rockfalls or earthquakes. However, this earthquake was part of a larger earthquake series with the main events in 1885, 1887, 1889, and 1911.

The 1911 Chon-Kemin Earthquake happened close to the 1889 quake and was analysed in much more detail. Proper rupture mapping was done by a field crew (Bogdanovich et al., 1914). It is known that this quake also caused massive landslides, so the same can be expected for the 1889 event. The 1887 Verny Earthquake (M7.3) happened close to the modern city of Almaty and caused severe damage there. Due to the proximity to the city, earthquake environmental effects caused by this quake are rather well documented. Tatevossian (2007) in fact used the historical reports and calculated an intensity map solely based on impacts on the environment such as landslides and rockfalls. This approach follows an initiative by INQUA to create a new macroseismic intensity scale that employs earthquake environmental effects. The idea is that by using these effects only, one would overcome the problems of classical intensity scales such as MSK-64, MMI, or EMS-98, namely that

For these reasons, the Environmental Seismic Intensity Scale, ESI-2007, was built (Michetti et al., 2007). It allows assigning and comparing intensities for modern, historical, and paleo-earthquakes. Quite often, mass movements such as landslides are among the best indicator for past seismicity because they are easy to be identified in the landscape and can be dated by a manifold of different methods. In the Tien Shan of Kazakhstan and Kyrgyzstan, landslides are quite common. While some of them are triggered by strong quakes such as the 1992 Suusamyr Earthquake, others occur because of heavy rain, river undercutting, or other reasons. The example of the 19 April, 2018, landslide showed that very large mass movements do not necessarily need a seismic trigger, which is why we always look for multiple effects of the same earthquake.

A huge landslide that occurred during the 1992 Suusamyr Earthquake.

These ambiguities are one of the reasons why we hunt for old fault scarps (= the surface breaks of earthquakes) in Central Asia. Scarps are not easily mistaken for another landscape feature, and their height and length allows to directly estimate the magnitude of a large earthquake that happened in the past. From this method and paleoseismic trenching we know that the recurrence time between two large earthquakes on the same fault may be up to several thousands of years (Grützner et al., 2017a), which is why we cannot always rely on the surface offset to be preserved. We also know that even in areas like Almaty, where destructive earthquakes are known from historical reports, another active fault that hasn’t ruptured in historical times may lie just beneath the city (Grützner at al., 2017b). Landgraf et al. (2016) and Patyniak et al. (2017) found that earthquake series such as the 1885-1911 one may have occurred as similar clusters in the past, which gives us some important clues for understanding earthquake physics and fault behaviour.

To conclude, landslides such as the 19 April, 2018, make it harder to read the geological record of large earthquakes, but we know about these effects and we employ additonal, powerful methods to unravel a region’s seismicity.

Thanks to Aidyn Mukambayev for pointing me to the news!