Great news from Italy – A new version of the Database of Individual Seismogenic Sources (DISS) is now online! A huge amount of work went into this latest release which has several important updates and a fantastic new amount of data. Our colleague Umberto Fracassi sent me the following description of the new features: 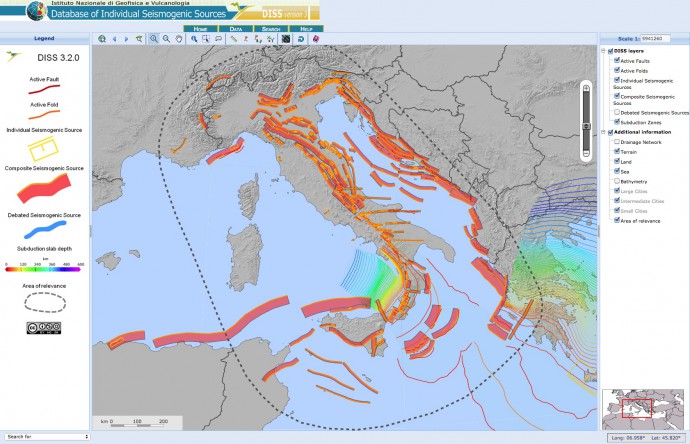 “Five years after the release of the previous public version (3.1.1, July 2010), on 30 June, 2015, we proudly released version 3.2.0 of the Database of Individual Seismogenic Sources (http://diss.rm.ingv.it/diss), covering Italy and its surrounding seas and territories, the central Mediterranean, and sections of the Aegean Sea.

This new release features significant improvements with respect to the previous version, both contents- and structure-wise. Version 3.2.0 also benefits from the developments achieved for the European Database of Seismogenic Faults (EDSF) during the EU-funded Project SHARE.

Concerning the contents, in the new release you will find:

The new release is hosted on a more reliable web-server architecture featuring a totally revamped web-site and web-mapping capabilities. A new and informative front-end now allows registered users to interact with the DISS Working Group and to start a public debate on specific sources or on any of the contents of the Database.

For further information on the Database and its contents, pertinent publications and links to relevant websites you may refer to the buttons located at the top of the home page.

The vector data of the new release, including source geometries and parameters, will be soon available for download in various GIS formats, including Google Earth.”

Thanks to all compilers and the DISS Working Group!