The geometry, length, and displacement of fault ruptures that breach the surface provide critical information on the behavior of faults during seismic events (coseismic deformation), and on their long-term behavior. The study of coseismic fault ruptures has concentrated almost exclusively along continental faults, while submarine studies have been scarce, and only a few provided quantitative constraints in parameters such as fault displacement (e.g., Tohoku Earthquake). In addition to represent more than two thirds of the Earth’s seismicity, submarine faults can also be associated with tsunamis, potentially increasing the seismic hazard that these structures pose. 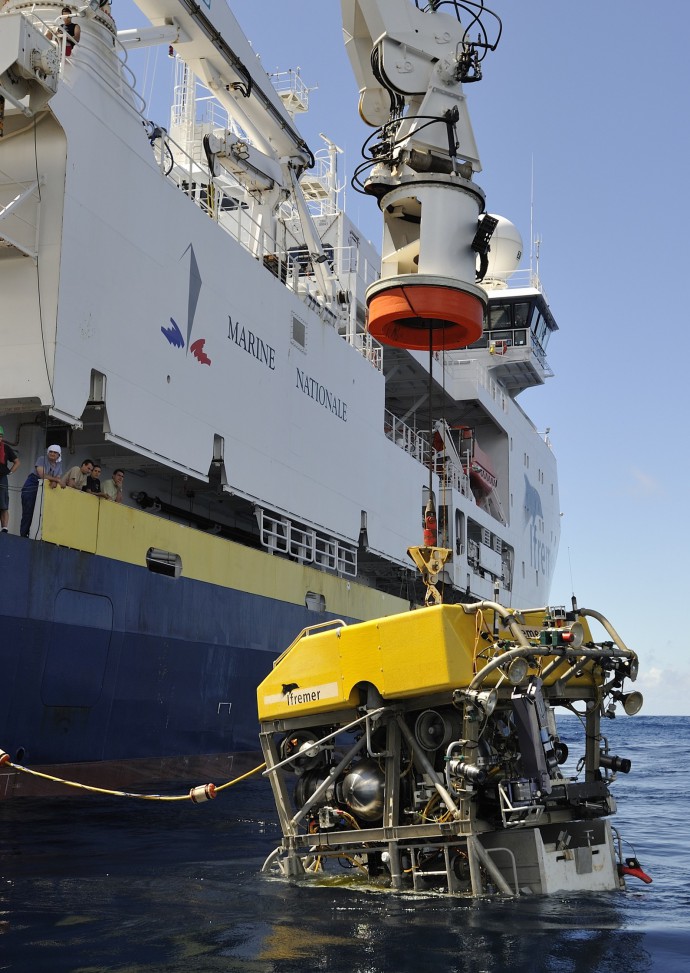 ROV Victor6000 (IFREMER), being deployed during the ODEMAR cruise in 2013. Victor can acquire high-definition video imagery in addition to near-bottom multi beam bathymetry. It is also equipped with arms for sampling.

During the ODEMAR 2013 cruise onboard N/O PourquoiPas? (IFREMER, FR) we used the autonomous underwater vehicle AUV Abyss (GEOMAR, D) and the remotely operated vehicle ROV VICTOR 6000 (IFREMER, FR) to map and survey the Roseau Fault between Guadeloupe et Dominica, in the Lesser Antilles, at water depths of ~1000 m. This fault ruptured during the 2004 Les Saintes Earthquake (magnitude 6.3), that also triggered a tsunami with a run-up of up to 3.5 m. The Roseau fault bounds an extensional intra-arc graben that accommodates extension perpendicular to the overall arc orientation. In this area a recent study based on extensive multi beam, sonar, and high-resolution seismic reflection profiles has documented complex fault interactions with submarine volcanism, erosion, and sedimentation. 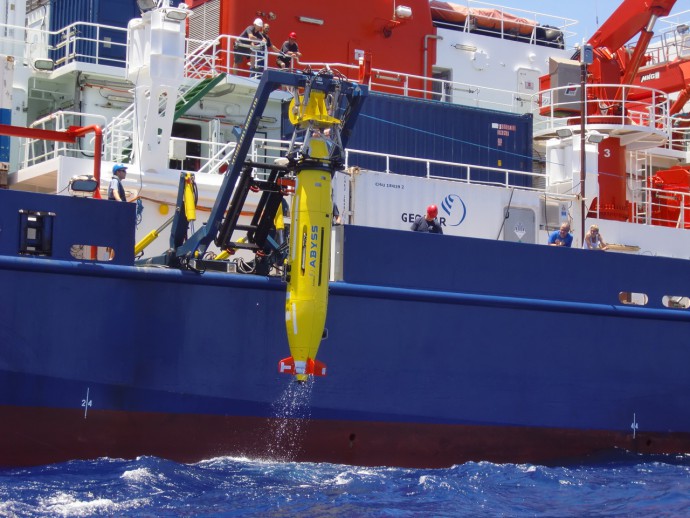 AUV Abyss 6000 (GEOMAR, Germany) being recovered after a survey dive. The AUV is equipped with a multi beam bathymetry system, in a addition to other sensors (magnetometer, nephelometer, Eh…). 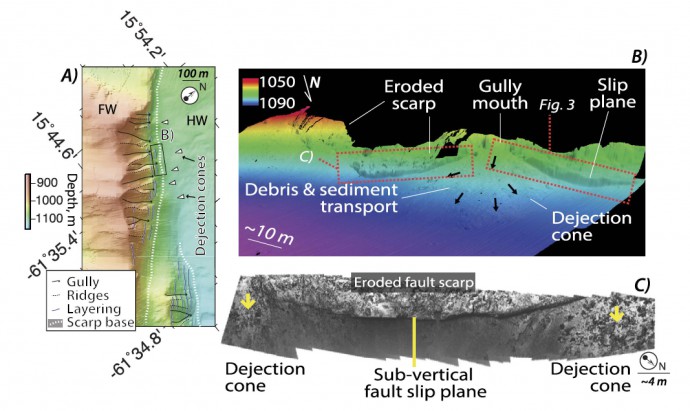 AUV high-resolution bathymetry of the Roseau Fault scarp (A) showing erosion channels along the scarp face. The ROV microbathymetry reveals subvertical fault planes preserved between gullies, that feed dejection cones (B). Seafloor photomosaics acquired with the ROV show that the fault slip surfaces have a curved structure (C)

The near-bottom, high resolution bathymetry and imagery acquired with the deep sea vehicles have allowed us to identify, for the first time, a marker of coseismic displacement along a normal submarine fault, that can be associated with the 2004 Les Saintes earthquake fault rupture. Coseismic displacement is observed along a ~20 m long sub-vertical fault surface, that is weathered and dusted with sediment, except for a  ribbon at its base that is continuous and has a smooth, unweathered surface, that is likely exposed by the recent 2004 earthquake. A terrain model of this fault scarp constructed from ROV video imagery allows us to measure a displacement of 0.9 m. Seafloor photomosaics acquired during these surveys also reveal cracks in the sediments at the base of the fault scarp, documenting a damage zone that locally extends to >100 m off-fault. These deformation structures suggest that the Mw6.3 earthquake had a minimum surface rupture length of 3 km along the surveyed fault scarp, with a vertical displacement of ~1 m. 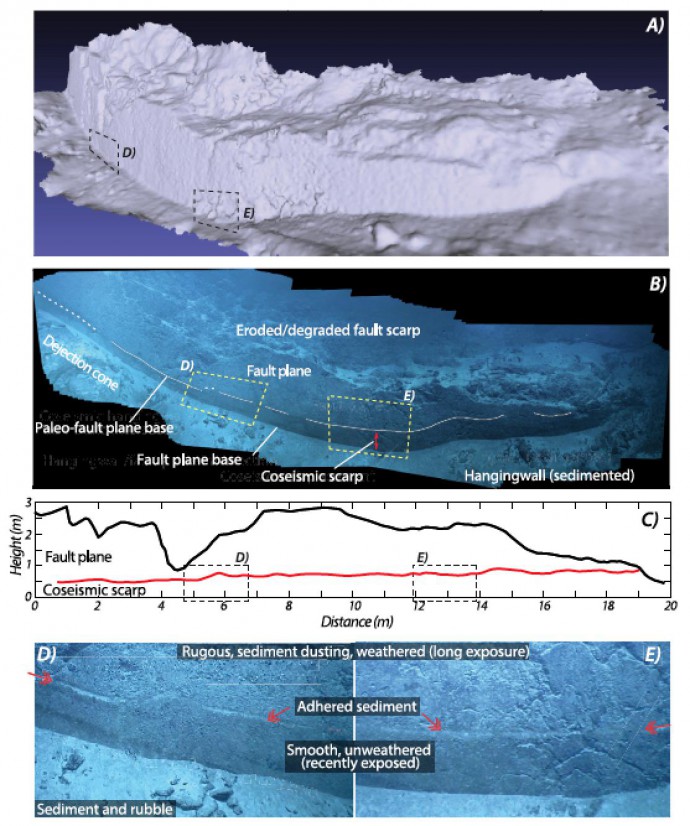 3D terrain model of a subvertical fault slip plane derived from video imagery using structure from motion techniques (A). The videomosaic shows the smooth fault surface that is preserved below the eroded fault scarp, and shows a line that mimics the geometry of the base of the slips surface (B). The coseismic displacement, that is estimated at ~0.5 – ~0,9 m along this fault slip plane (C), is measured from the imagery mapped on the 3D model (A and B). Details of the coseismically exposed fault surface show a change in texture of the fault plane due to weathering,and the limit between the weathered and unweathered fault surface corresponds to a line of adhered sediment (D,E)

These results demonstrate that neotectonic studies using deep-sea vehicles for data acquisition, and state of the art imaging techniques (structure from motion, photomosaicing) for data processing, can now be conducted at the seafloor to obtain high-resolution data and observations comparable to those routinely acquired on-land. We will conduct in 2017 the SubSaintes cruise in this same area, to extend the mapping and geophysical observations from 2013. During this cruise we will deploy the ROV Victor6000 from the vessel NO Atalante.  During this cruise we plan to extend the visual observations to other sub-vertical fault planes exposed along the base of the fault scarp, so as to quantify vertical displacement along the entire fault system. 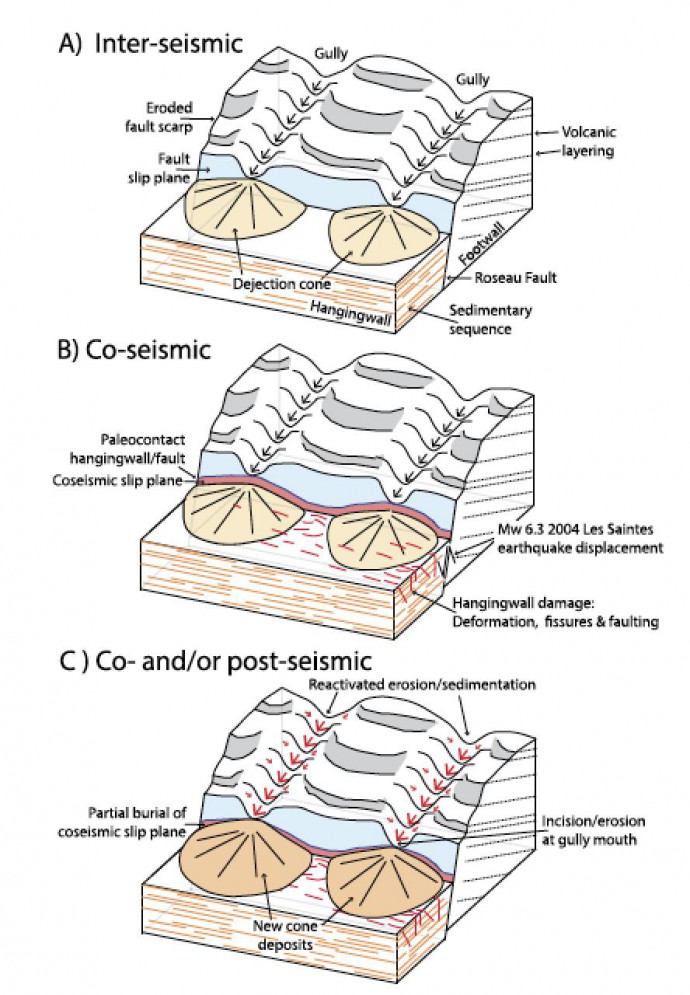 These surveys will also determine if the unseuveyed fault ruptured beyond the 3 km that we have documented here. We will also extend our photomosaic surveys to thoroughly map deformation structures, and how these vary both along the fault and away from it. Finally, microbathymetry will be acquired throughout the area to study the interactions between volcanism and faulting. Sampling of faults and volcanic rocks will provide information on the nature of the fault rocks and style of weathering, and on the age and geochemical evolution of the volcanism in the area and their interactions with faults.