Tsunamis are a very real threat in the Indian Ocean. Most people will immediately think of the 2004 tsunami and the Sumatra subduction zone, but the Arabian Sea has seen strong tsunamis in the past, too. In 1945, a major earthquake at the Makran Subduction Zone caused a large tsunami (Hoffmann et al., 2013a). In 2013, the on-shore Balochistan earthquake caused a submarine slide which in turn triggered a tsunami that reached the coast of Oman (Heidarzadeh & Satake, 2014; Hoffmann et al., 2014a). There is also evidence for paleotsunamis along Oman’s coast (Hoffmann et al., 2013b; Hoffmann et al., 2014b). Now a team of scientists from RWTH Aachen University (Germany) and GUtech (Muscat, Oman) have published a tsunami inundation scenario for Muscat (Schneider et al., 2016). This is lead author Bastian Schneider’s guest blog on this research:

I was working in Oman for the past 3 years with the main focus on coastal evolution projects and especially on a better understanding of extreme wave events. Every time I returned to Muscat, I got lost on the roads. I took a wrong turn, wondered if the highway exit disappeared or if it is just the jet lag, or weather this new road appeared just over night. Highways being opened (or closed) almost on a daily level and buildings popping out of the ground like mushrooms seems to be normal in Oman. 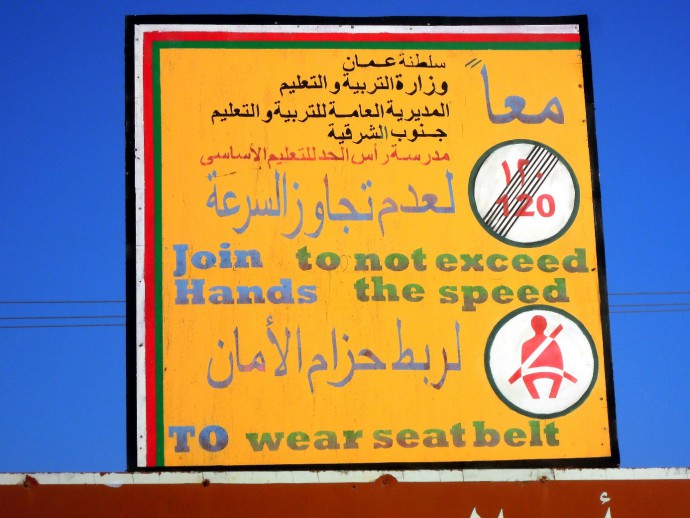 Not only the road layout is confusing, same goes for the road signs.

Every time I am astonished, but then again worried about the rapidness of urban development. Witnessing this explosion in population and infrastructure in combination with the results of our working group and colleagues about a prevalent tsunami (and cyclone) hazard (as described in Hoffman et al., 2013b) made me curious. And as a geographer, I have a natural penchant towards human-nature interaction studies. 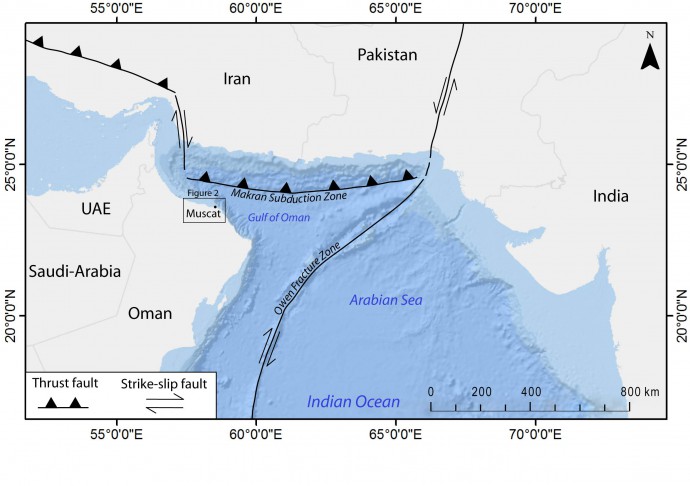 A simplified overview of the tectonic setting of the area.

We have an idea about possible tsunami magnitudes (they are capable of lifting 120 t boulders in some areas in Oman), their return periods and their impact on historical settlements along the Omani Coast (HD6, Hoffmann et al., 2014b). But we have no idea how a tsunami event of a historical extend would affect the super-modern and sprawling Muscat Capital Area with its 2 million inhabitants. Are we doing our research just for the research’s sake or do we seek for an application of our studies? 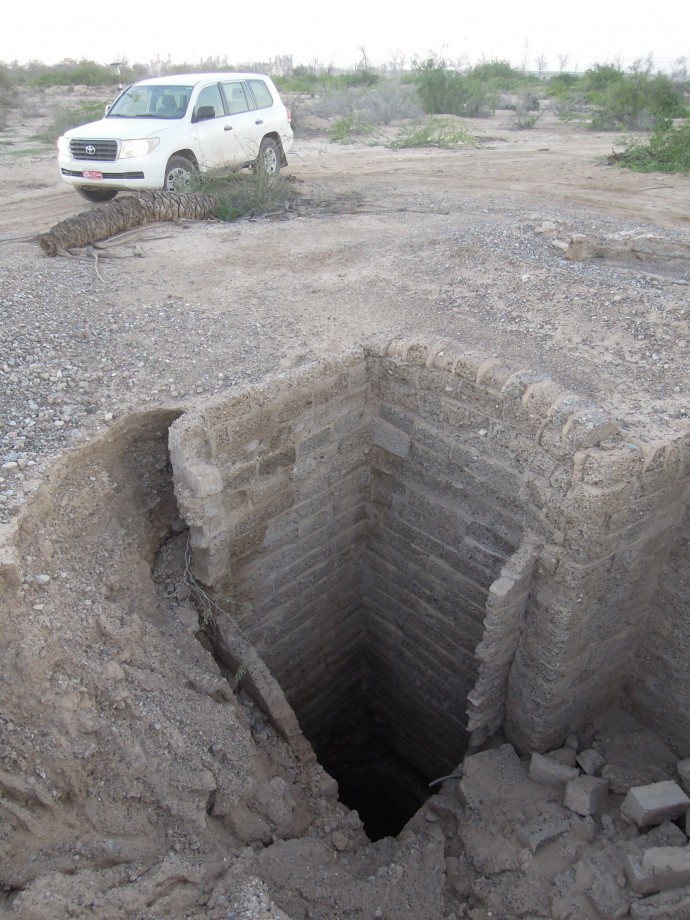 Oops, Obstacles! A dry well. Water resources are being overexploited. Open your eyes and don’t listen to the Navigation system!

The idea was to choose two model-areas, create a building and road network database using a combination of field work and remote sensing and coupling those data with a high-resolution DEM. We mapped over 6000 buildings and acquired DEMs covering more than 45 km² via driving a Landcruiser-mounted dGPS for several hundreds of kilometers through Muscat and its suburbs. 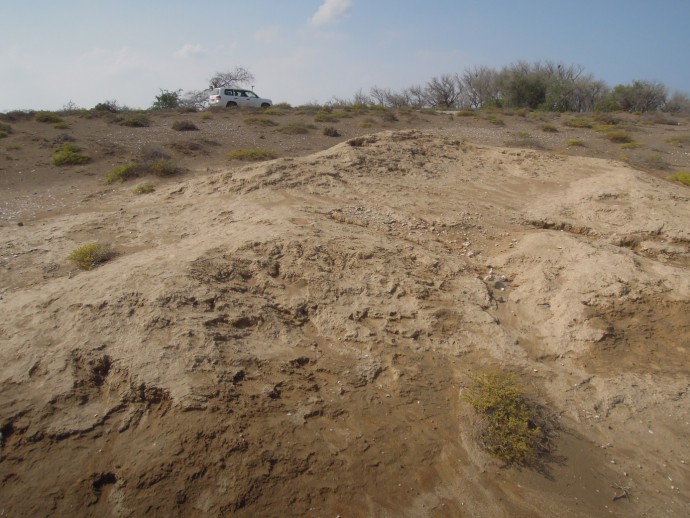 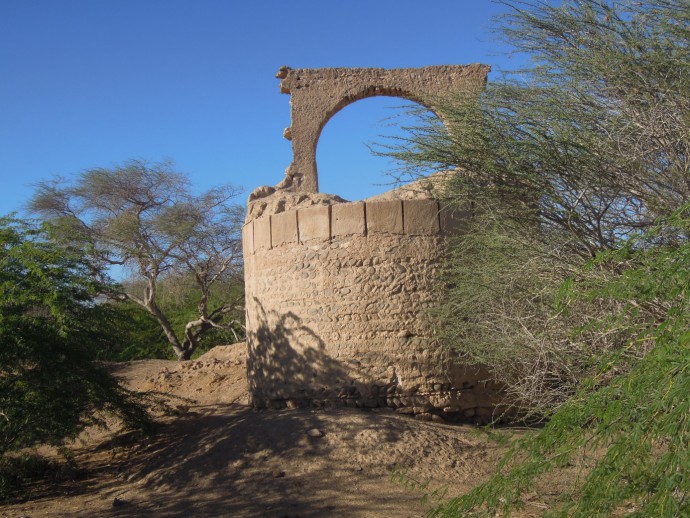 The Database and model were combined and virtually flooded in ArcGIS. We used two inundation scenarios of 2 m and 5 m to calculate the potential structural damage to the inundated buildings, represented by a Relative Vulnerability Index. The findings of those model-areas were then upscaled on the entire MCA.

Furthermore we used SRTM data to visualize a possible flooding extend for a worst-case scenario resulting in a 15 m wave in Muscat. 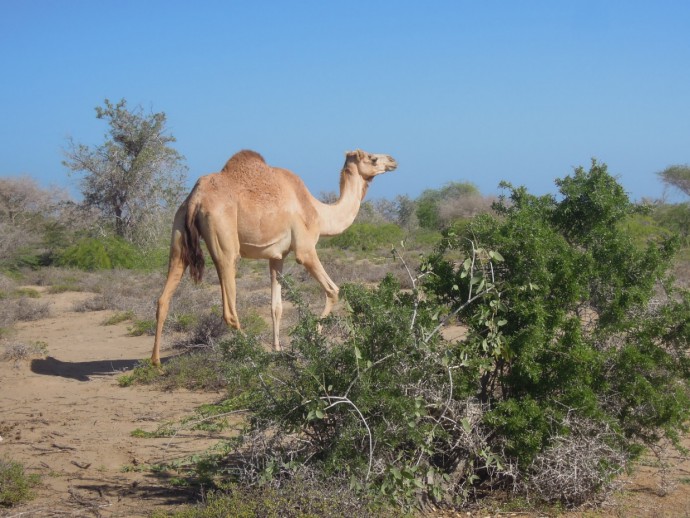 A typical sight during the mapping campaign.

The results were kind of shocking but not surprising to me. Given the almost flat Batinah Coastal Plain, on which most of Muscat’s suburbs stretch along an 80 km long sandy coast, even a rather low inundation depth of 2 m can flood enormous areas. A small increase in wave energy and therefore wave height quickly leads to vastly increasing inundated areas a significantly higher RVI and a huge number of affected people. Following our results, a 5 m tsunami wave can directly affect the houses of over 300,000 people in Muscat alone. 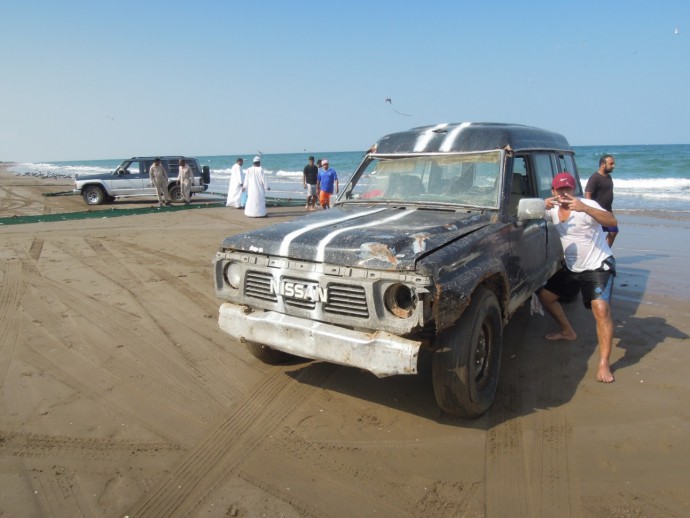 It’s always useful to make friends with the locals!

Most buildings are rather new with a good construction standard which reduces tsunami vulnerability. But given the large number of affected people and the short wave travel time of about 30 min, appropriate evacuation and rescue operations seem to be difficult. 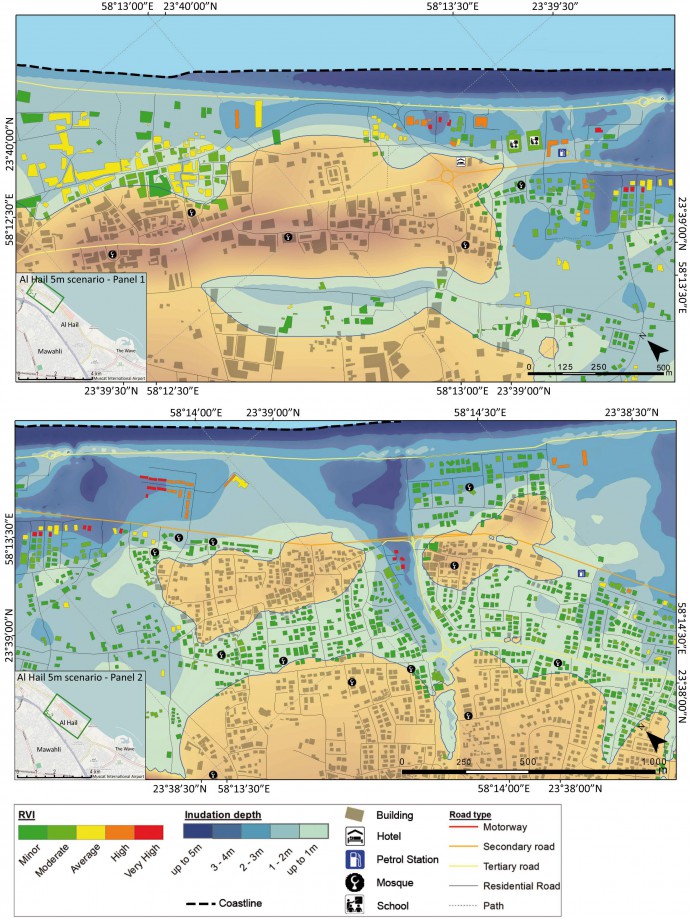 An example of the flooding extent and the RVI values for the 5 m scenario in Al Hail.

Although a Multi-Hazard Early-Warning System was inaugurated in Muscat in March 2015, effective counter-measures such as rapid warning dissemination, emergency training, designation of evacuation routes, structural protection of critical infrastructure (such as sea-water desalination plants or refineries) or an adopted land-use planning seem not to implemented yet. 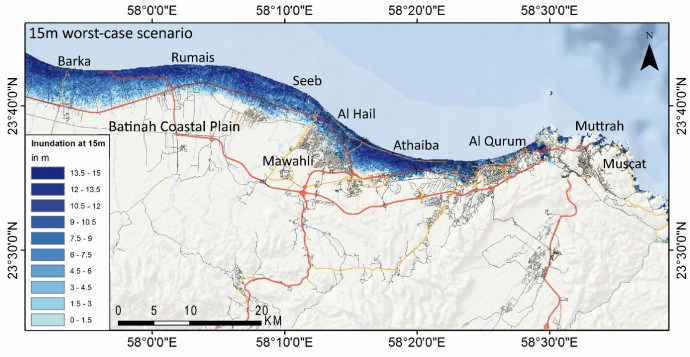 A map of the 15 m worst-case scenario reveals the extensive inundated areas.

We still see a huge potential in paleo-tsunami studies in the Arabian Sea but in the meantime we have to keep it with Omani fatalism, drink beer and hope no larger tsunami will strike in the near future.