On 26 October two shallow normal faulting earthquakes occurred in Central Italy, very close to the epicentre of the Amatrice Earthquake from earlier this year. The first quake reached a magnitude of M5.5 and was followed by a M6.1 just two hours later. The events caused serious damage (see here for a video and some images), but luckily only one person died as most people had left their houses after the first moderate shock. This could have turned out much worse. Apparently the quakes at least partly filled the gap between the 1997 Colfiorito events and the 2016 Amatrice Earthquake. 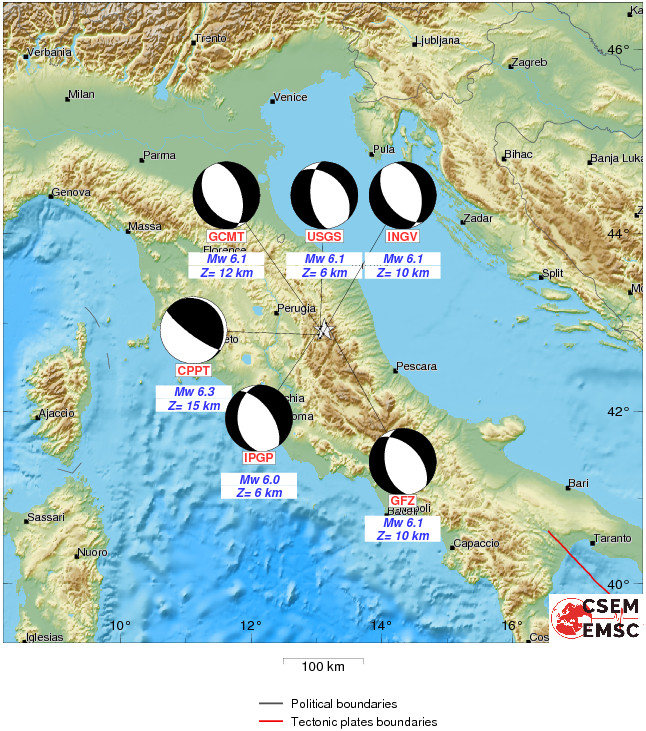 Thanks to the Sentinel-1 satellites we now already have an interferogram that shows the ground deformation. The data is provided by NERC COMET and can be downloaded as Google Earth overlay from the COMET website: 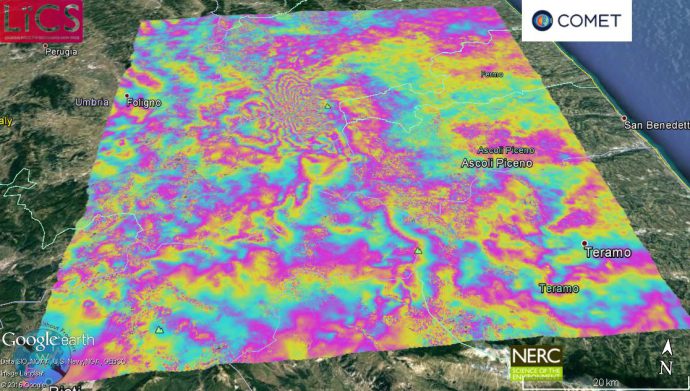 Our colleague Franz Livio tweeted that an ISPRA team is already underway to map the geological ground effects:

Eutizio Vittori from ISPRA sent this image which apparently shows the surface rupture due to the most recent event:

Here it is! Courtesy of Tiziano Vittori from ISPRA. pic.twitter.com/hRLyvVLOVi

Franz has just published a paper on how InSAR data can help to assess seismic hazards, especially Probabilistic Fault Displacement Hazard Analysis (PFDHA). I asked him what he found and here is his reply:

“Recent earthquakes (e.g., Napa Valley, L’Aquila and Amatrice events) showed that, together with primary surface faulting, also displacement on secondary faults occurred (i.e., distributed faulting). Currently, prediction of occurrence of distributed faulting involves the applications of Probabilistic Fault Displacement Hazard Analysis (PFDHA) whose results fit sufficiently well real data in the near-range of the primary fault but show considerable inaccuracies in the far-range. We applied a GIS analysis approach, making use of InSAR-derived coseismic displacement field, to inspect shortcomings of the present probabilistic approach and to propose, in the future, the integration of dataset derived from remotely-sensed data into PFDHA.”

Thanks Franz and please keep us updated!

In latest news, an oblique thrust earthquake of magnitude 5.8 occurred under the Tyrrhenian Sea in a depth of 450 km. Due to the depth no damages are expected but the quake was widely felt. I doubt there is any connection between this event and the quakes two days ago. The distance between them is too large for Coulomb Stress triggering and the quake came too late for dynamic triggering. But never say never, I wouldn’t be surprised if someone checked this possibility in a paper in the near future.