Some weeks ago we published a new study on the classification of earthquake-induced landslide event sizes based on seismotectonic, topographic, climatic and geologic factors. Our idea was that this classification could be used to help improve seismic hazard assessment by contributing to a better prediction of landslide hazards induced by an earthquake when the geologic, topographic and climatic context is well defined. Possible applications could be the short-term prediction right after an earthquake or scenario modeling, e.g. for critical infrastructure. Since earthquake triggered landslide event sizes are also an important proxy for the estimation of magnitude and intensity of past earthquakes, I thought our study might be interesting for the paleoseismicity community as well, and so I put together a brief summary.

For sure, everyone interested in earthquake environmental effects is familiar with the classic work of Keefer (1984), reviewing characteristics of 40 historical earthquake-induced landslide events and estimating

Updates to this work have been published by Rodriguez et al. (1999) for earthquakes that occurred in the years between 1980 and 1997 and again by Keefer in 2002. However, in the meantime, several strong earthquakes have occurred that triggered significant landslide events, such as the 2008 Wenchuan, the 2011 Tohoku and the 2015 Nepal events. At the same time, thanks to the increasing availability of data and the help of many researchers worldwide remotely mapping landslides on satellite images, the documentation of such events experienced a real boost during the past years. For this reason we thought it is about time to update the world-wide review of earthquake-induced landslide events and derive some new implications that can hopefully help in the future to predict possible landslide event sizes when an earthquake occurs.

Our basic idea was to come up with a combination of different factors related to the triggering of landslides during an earthquake that go beyond magnitude or intensity. Recent events, such as the Wenchuan 2008 earthquake or the Chi-Chi 1999 earthquake, showed impressively, how a specific combination of factors, such as an extensive surface rupture of the activated fault inside of a mountain range paired with humid climatic conditions, can favor the triggering of landslide events of devastating dimensions. Also the particular characteristics of the activated fault can strongly affect the extend of triggered landslide events, so the Nepal 2015 earthquake, for instance, induced far less landslides than the Wenchuan 2008 earthquake, where the main difference was the location of the surface rupture within the very steep Longmenshan Range in the case of the Wenchuan event vs. the location of the surface rupture in the frontal part of the Himalayas, with less steep and high slopes, in the case of the Nepal event.

So, in a first step, we defined five factors that we wanted to consider in our classification, which are the earthquake Intensity (I), a Fault factor (F) taking into account the fault location, type and length, Topographic energy (TE), the Climatic background (CB) and a Lithological factor (LF), as explained in more detail in the table below. Then we assigned certain weights to the factors in order to be able to calculate the potential number of earthquake-triggered landslides (NL) and the potentially affected area (AL). 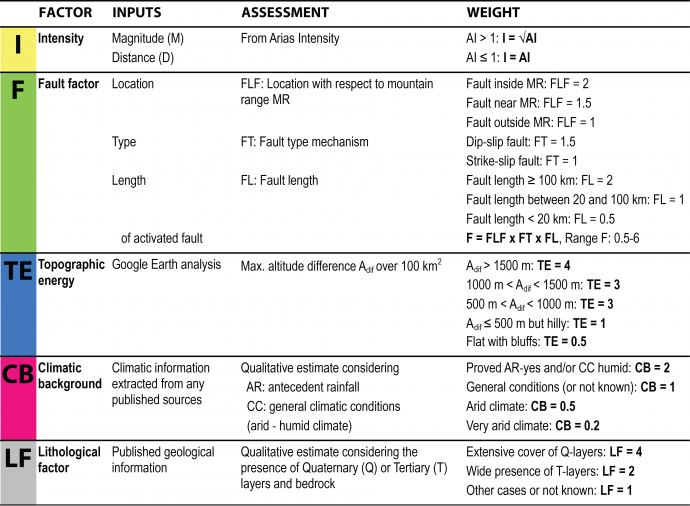 The next step was reading through heaps of papers, looking for information about the factors and the landslide event sizes for 100 past earthquakes, having Google Earth and GIS run hot for checking the Topographic energy factor, and looking for alternative sources when no information could be found in papers. Information on the landslide event sizes and affected areas were hard to find, especially for earthquakes way back in the past, and moreover numbers cannot easily be compared since the accuracy and coverage of landslide mapping changed over time. So, for instance, for the Assam 1950 earthquake, one of the most devastating events known, landslides are only documented in a report published by a botanist, who happened to be in the mountains near the epicenter when the earthquake struck, watching the object of his research turn into dust:

“The Dibang valley and its main tributaries were almost completely denuded of forests from the beginning. This river is likely to give trouble for a generation.” (Kingdon-Ward, 1955).

Apart from being a thrilling read, such documents provide little useful quantitative information. But also for modern, well-documented events, numbers sometimes vary significantly. For the Wenchuan 2008 earthquake, for instance, the number of 60,000 mapped landslides (Gorum et al. 2011) is opposed to 200,000 mapped landslides (Shen et al. 2015). Ok, granted, both numbers are extremely high and beyond human imagination (at least beyond my imagination). Anyhow, we had no other chance than to live with these uncertainties, and so we used the well-documented cases, where numbers of triggered landslides and affected areas could be found, for calibrating and refining the assigned weights and making a prediction for all 100 earthquakes. 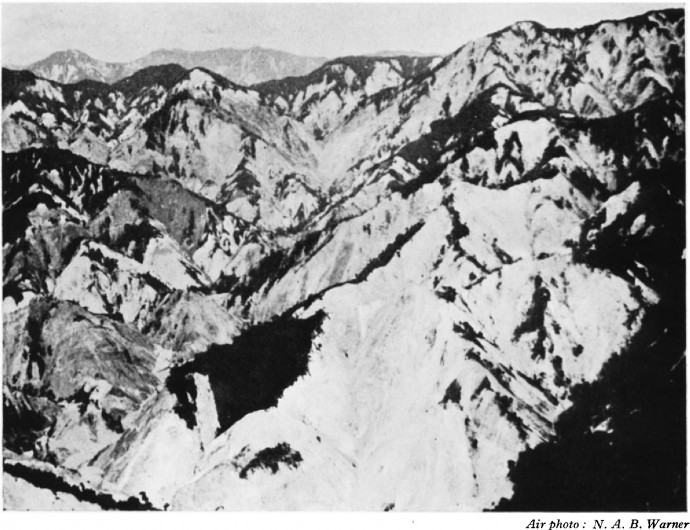 Forest stripped from hillsides of the Dibang valley during the Assam 1950 earthquake. Photo from Kingdon-Ward (1955).

The figure below shows our assigned weights for each factor in the left graph and the predicted numbers of landslides and affected areas compared to the observed number of landslides (when available) in the right graph for 50 earthquakes. Firstly, we believe that the classification is basically able to provide reasonable estimates. In some cases the prediction overestimates the known number of triggered landslides, while it often underestimates the size of the affected area. For several events (especially the older ones), the overestimation of the number of landslides can partly be explained by the incompleteness of the published catalogues. The underestimation of the extent of the area, however, is real, as some particularities of non-typical cases cannot be taken into account by such a general approach. According to our classification, the Wenchuan 2008 earthquake was the most devastating event in terms of landslides, followed by the 1950 Assam earthquake and the 1920 Haiyuan-Gansu earthquake in China, that struck an area highly susceptible to earthquake triggered landslides in terms of lithology with extensive loess covers. 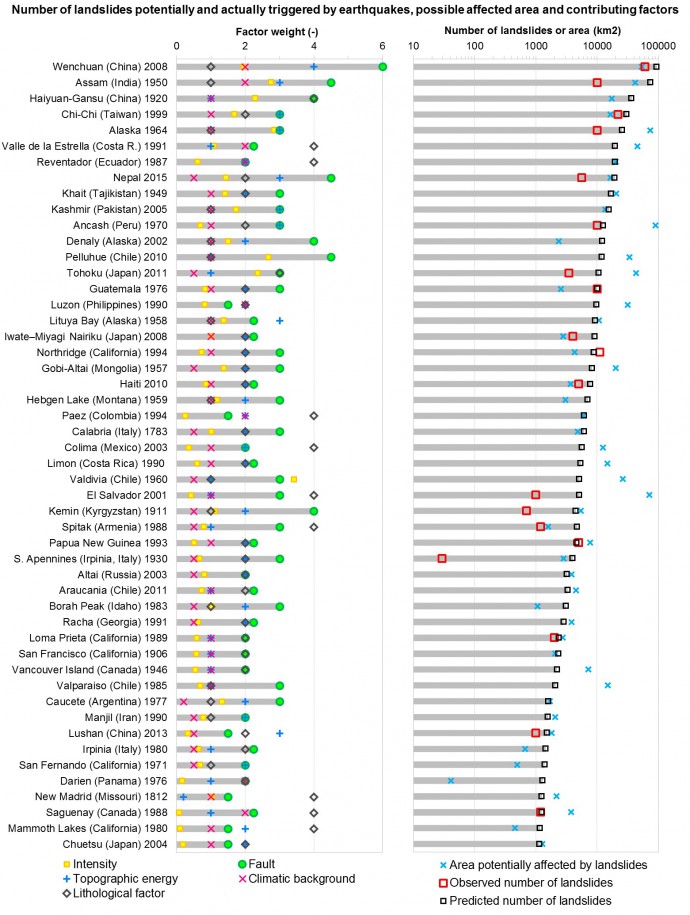 What about the non-typical cases?

In the paper we also discuss some non-typical cases of far distant or delayed landslide triggering. The far distant triggering of landslides is a topic that has not stimulated much attention by researchers so far. It can for instance be related to local site amplification, to intrinsic high failure susceptibility or to remote effects of deep focal earthquakes, such as in the Hindukush – Pamir area or the Vrancea region in Romania. Cases like the Baipaza landslide in Tajikistan, triggered in 2002 by the Mw = 7.4 Hindukush earthquake at a hypocentral distance of 300 km, damming the Vaksh River and forcing a hydropower station located upstream to stop operating for months, show that such events should not be considered as anecdotic, since they can cause enormous damage. Examples for delayed triggering are the post-seismic debris flows in the Wenchuan area. I reported on one example in an earlier post. Another example is the Kainama landslide in Kyrgyzstan, which was triggered in 2004, three weeks after local Mw > 4 earthquakes and related to spring rainfalls.

More interesting non-typical cases are discussed in the paper. So, in case I could make anyone curious: welcome to check out the whole paper, it is open access.