A Holocene surface rupture in Germany

I am quite happy that our new paper has finally been published in GJI. We worked on a fault between Aachen and Cologne in Germany and found that there has been a surface rupturing earthquake less than 9000 years ago, and possibly not much older than 2500 years BP. The area is of interest also because in 1755/56 a series of damaging earthquakes hit Düren and its surroundings – these are the strongest historical events in Germany that we know of. The quakes were felt as far away as Berlin, Strasbourg, and London, yet there were no primary ruptures. “Our” quake must have been much stronger… 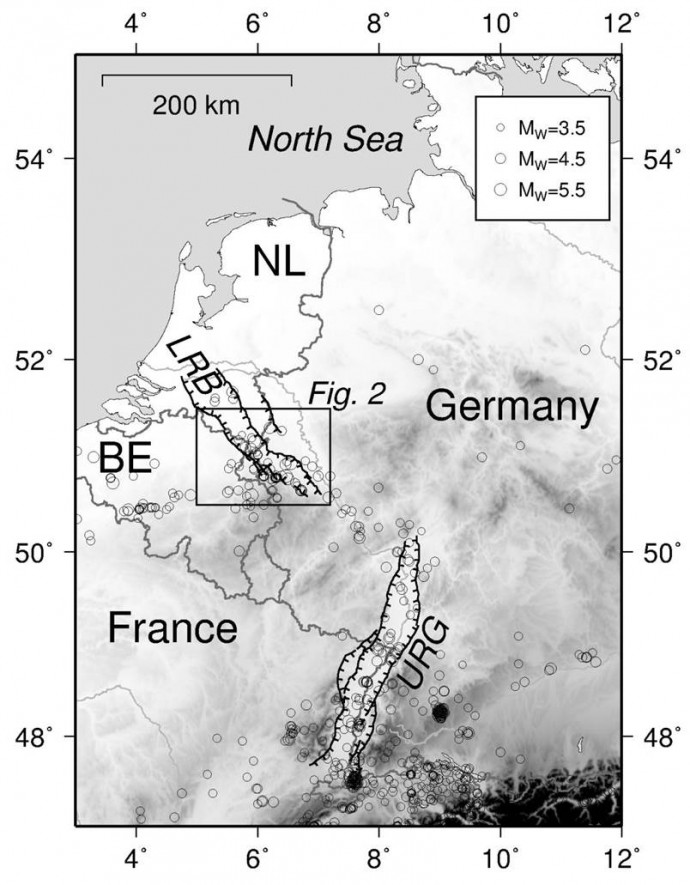 The Lower Rhine Basin (LRB) is one of the seismically most active areas in Central Europe besides the Upper Rhine Graben (URG), and forms a NW-SE striking graben system.

The Lower Rhine Basin (LRB) in western Germany, Belgium and the Netherlands forms a system of horsts and grabens separated by normal faults with slip rates well below 0.1 mm/yr. That’s almost nothing, almost stable. Still the LRB is among the seismically most active areas in Central Europe and here Germany’s strongest historical events took place 260 years ago. In late 1755 a series of earthquakes started that lasted several months, the strongest shock took place on 18 February 1756 near Düren. This quake reached intensity VIII and is thought to have had a magnitude of Mw5.8. Damage was recorded in the epicentral area and in major cities nearby like Aachen and Cologne. A landslide was triggered and the shaking was felt in up to 400 km distance, incl. London, Berlin, and Strasbourg. Still the causative fault is unknown, but the nearby Rurrand Fault was the candidate most people would have bet their money on.

The fault system in our study area, and earthquake data. We studied the Rurrand Fault at the site labelled ‘AW’.

None of the several historical earthquakes in the LRB produced primary surface ruptures. The very low fault slip rates and the long earthquake recurrence intervals make it hard to come up with a worst-case earthquake scenario. How strong can earthquakes get and how often do these big events occur? Are there even big events? Do they reach the surface, thereby adding surface faulting to the damage potential caused by shaking? That’s quite interesting in this area where millions of people live, where infrastructure is dense and expensive, where lots of large industrial plants are situated, and where even a nuclear reactor was once in operation.

Also, it’s not trivial to measure fault slip. Geodetic techniques don’t work well when your motions are as slow as 0.03 mm/yr. Most of the slip rates we know come from bore hole data, from a few outcrops, and: from paleoseismology! There is pretty exciting literature on LRB paleoseismology, I strongly recommend having a look. 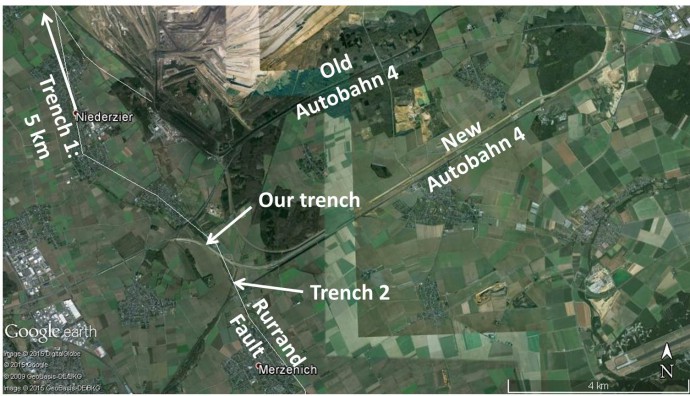 The location of our trench and two older trenches (1 and 2) dug by colleagues a few years ago.

In our study we worked on the Rurrand Fault. A major highway construction was undertaken a few years ago, and this was accompanied by an archaeological survey. During this survey the fault was exposed for a few weeks and we took the chance to describe and sample the outcrops and to run a near-surface geophysics campaign (georadar – GPR – and electrical resistivity tomography – ERT). 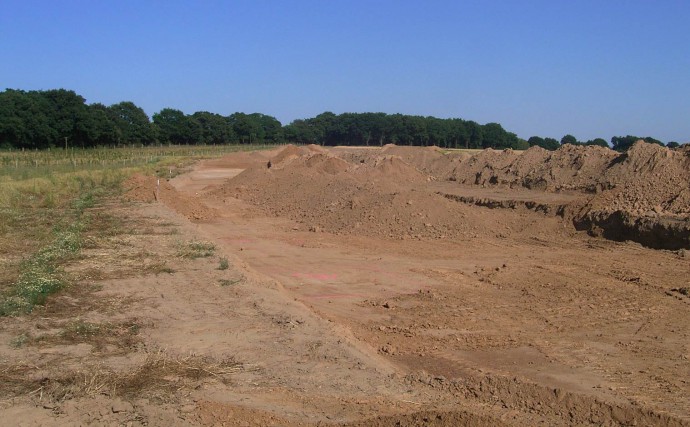 An archaeological survey was conducted at the highway construction site. 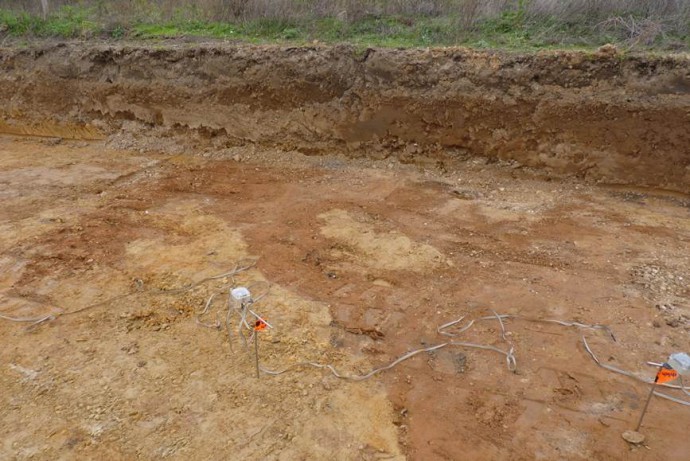 The most exciting moment was when we realized that the fault cropped out in the shallow archaeological pits. This meant that the fault offsets very young geological layers, and therefore, we speculated that we likely found a rather young earthquake rupture. However, this outcrop was not located where we expected the fault. 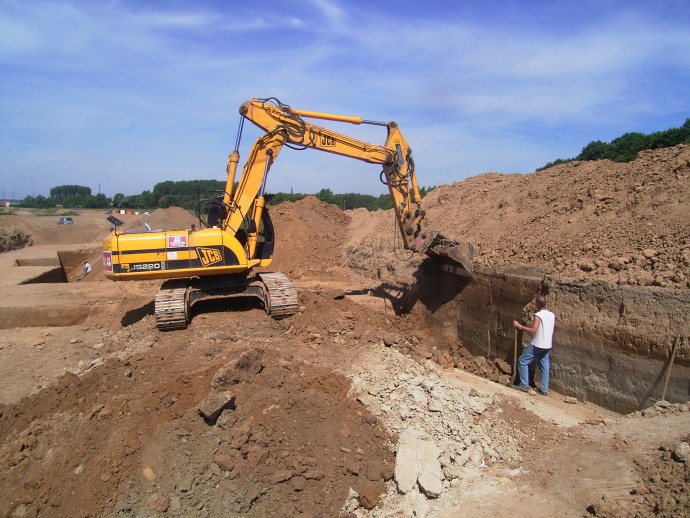 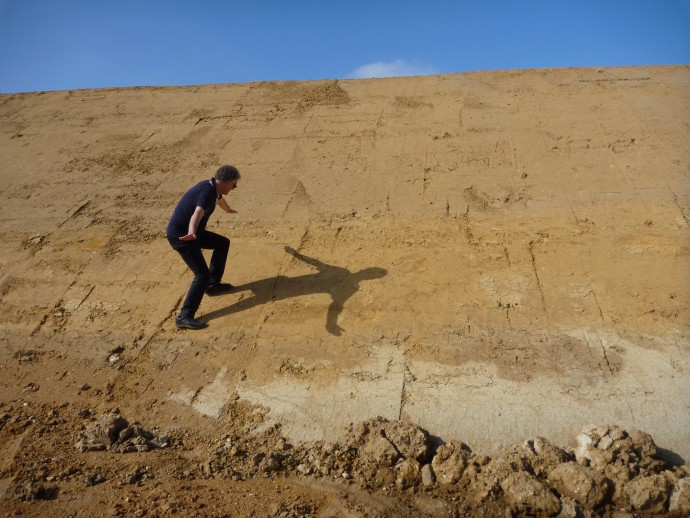 The morphological expression of the fault is a very gentle scarp where the fault had been unearthed in a trench nearby – our site was a bit off in the hanging-wall. So we needed to make sure that this offset was continuous as to rule out local ponds, slumps, landslides, erosional features or even man-made structures. And indeed we could trace the fault all across the large construction site. We then used geophysics to see if the apparent offset also continued to greater depths, because this would then be the final prove that we had to do with the Rurrand Fault. But let’s talk about the outcrops first. 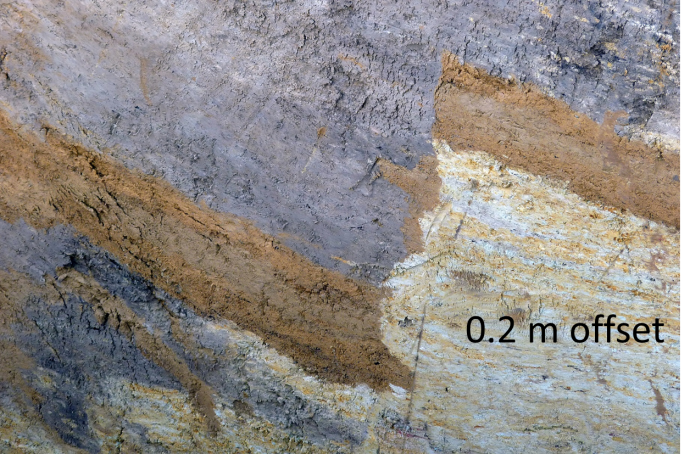 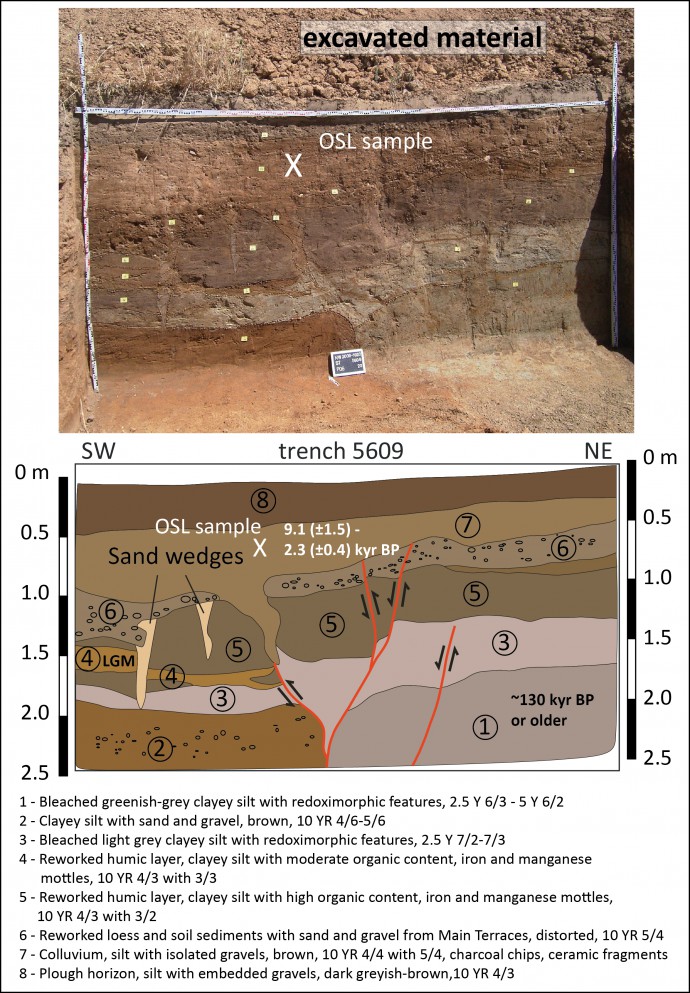 Our main outcrop with the geological interpretation.

We encountered several sites with sharp offsets of a few tens of centimetres. In our main outcrop, we found evidence for an open crack at the uppermost part of a fault strand that was filled with overlying material. We dated this overlying layer with optical stimulated luminescence to an age of ~2.5 – 9 kyr BP. Clearly Holocene! Our best guess for reconstructing the deformation involves another surface rupturing earthquake between the last glacial maximum and 130 kyr. Both events had offsets of less than 0.5 m. Depending on which fault segments rupture simultaneously, earthquakes of magnitude Mw6.4-M7.0 could be possible at the Rurrand Fault.

ERT data in Schlumberger configuration, the fault zone is in the centre of the profile.

Our geophysical data show that the vertical offset increases with increasing depth, which is what you would expect, because older layers were offset by earthquakes more often. Based on a prominent gravel horizon that we see in the ERT data, we calculate a slip rate of around 0.03 mm/yr since Lower/Middle Pleistocene.

Now that we were sure that we found Holocene surface ruptures, we wondered why the other paleoseismological trenches nearby did not give the same results. Clearly, they had trenched the fault only 1300 m south of our site, so what happened? We used 1 m aerial LiDAR data provided by Geodatenzentrum North Rhine-Westphalia (Geobasisdaten der Kommunen und des Landes NRW © Geobasis NRW 2012) to have a close look at the study area. As expected, the fault was mapped where the morphological expression – a gentle scarp – is visible in the field. However, our study site is situated somewhat further in the hanging wall, and this is exactly where the LiDAR data revealed a faint linear feature. By computing hillshade, ruggedness, slope and relief data the feature becomes clearer: 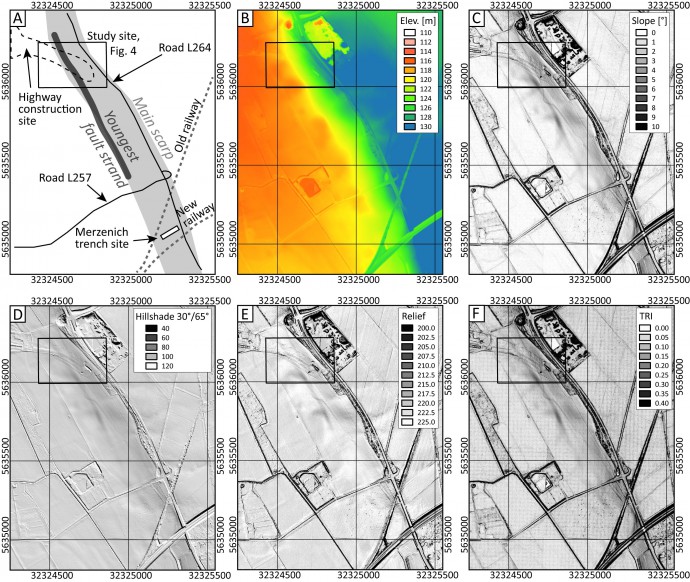 This lineament is parallel to the main fault, and quickly diminishes towards the SE. So it turned out that the youngest fault movements reached the surface off the main fault strand with the clear morphological expression: 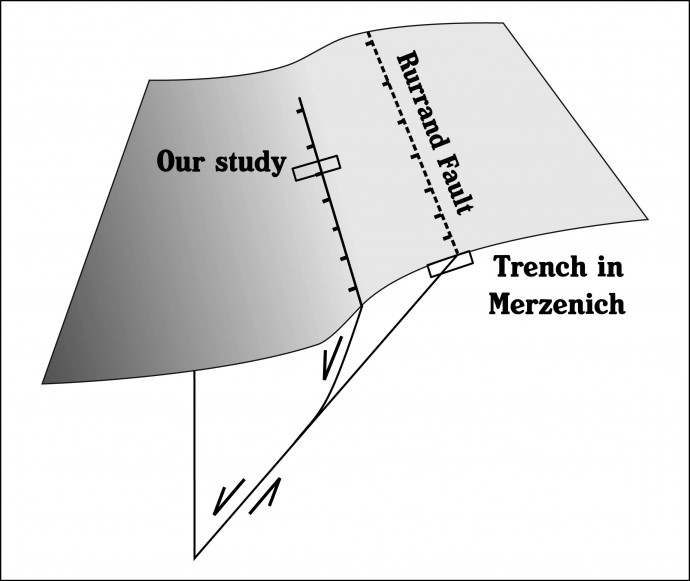 The Rurrand Fault with its main morphological expression, the younger fault strand and the Merzenich trench site compared to ours.