A creeping intracontinental thrust fault in the Tien Shan

The Tien Shan takes up about 20 mm/yr of N-S shortening as a result of the India-Eurasia convergence. Recent paleoseismological studies have shown that the shortening is accommodated by a large number of faults, whose slip rates are relatively low. Although the historical earthquake catalogues only reach back a few hundred years, we know that the Tien Shan has seen some of the strongest intracontinetal quakes world-wide with magnitudes exceeding M8. Paleoseismological studies have revealed a large number of surface-rupturing earthquakes, too. But the question is: Do all these known faults rupture in strong earthquakes? In a recent paper, my colleagues and I argue that there is at least one major fault in the Northern Tien Shan that is creeping (Mackenzie et al., 2018). 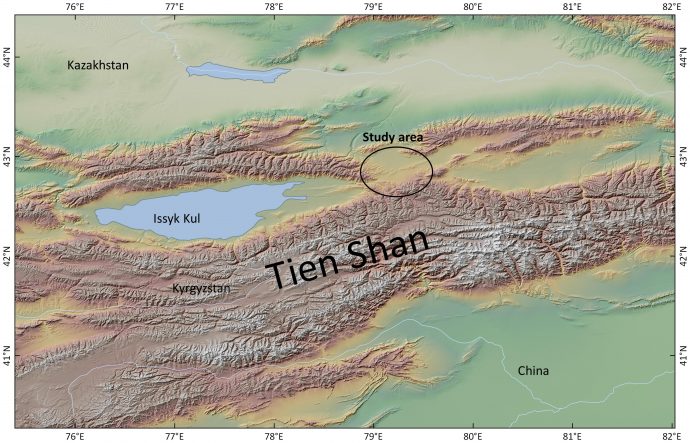 Our study site in the Tien Shan.

We worked on the Karkara Rangefront Fault (KRF), which is located to the east of Lake Issyk Kul on the border between Kazakhstan and Kyrgyzstan. This fault is part of the system that forms the northern boundary of the Terskey Range with a total length of >500 km. The GPS data of Zubovich et al. (2010) reveal that there is a rather velocity linear ramp across the Tien Shan with one exception: England & Molnar (2015) report a sharp step in the velocity field exactly at the location of the Karkara Range Front Fault. 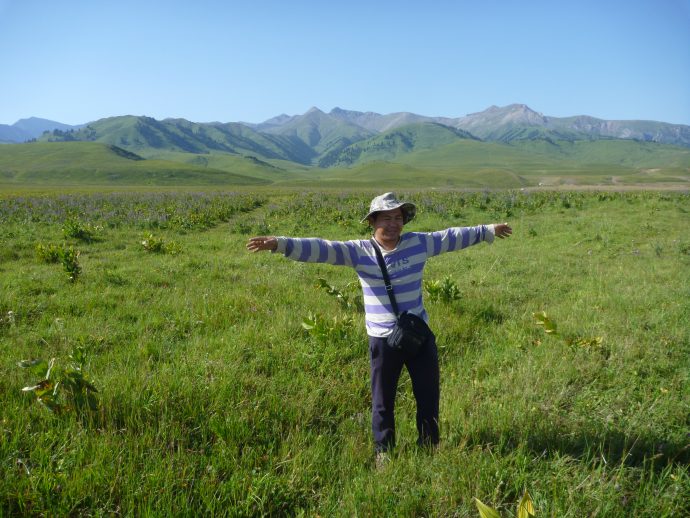 Aidyn in front of the flight of terraces at the fault.

So we went to the field and had a closer look at the fault. We found a wonderful flight of terraces that are vertically offset at the fault scarp by up to tens of metres. In front of the range front there is an anticline that also shows deformation in young strata and which is bound by an active fault. In order to precisely measure the vertical offset, we built a DEM from 0.7 m resolution stereo Pléiades satellite imagery and from low-altitude aerial surveys. We dated the age of the terrace surfaces with radiocarbon and optical stimulated luminescence (OSL). Assuming a resonable fault dip, we are able to narrow down the combined shortening rate of the two faults to 1.1-3.3 mm/yr. 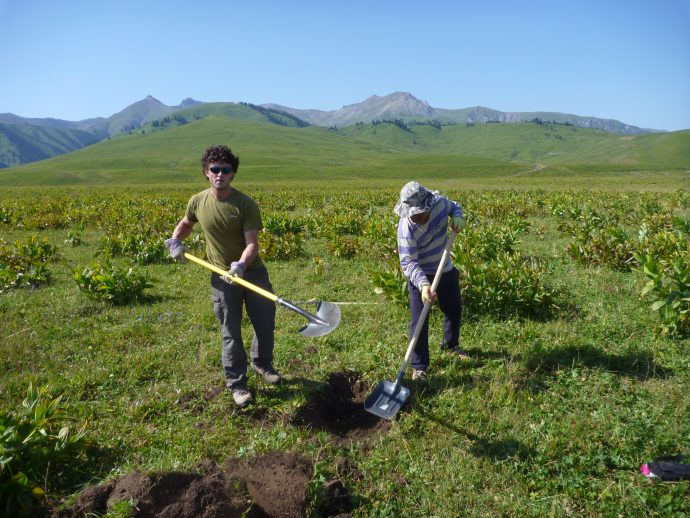 David and Azad digging a pit into a terrace for radiocarbon sampling.

We modelled the regional GPS data and found that the KRF is either creeping or locked to shallow depths of <3–5 km. A shortening rate of 2.9 ± 0.7 mm/yr would explain the step in northward GPS velocities, which fits very well to the slip rate derived from the river terraces. An additional hint that the fault is actually creeping comes from the morphology of the scarp. The scarp profile does not fit a classical scarp diffusion model expected for an old fault scarp, but its shape rather indicates a fresh scarp dominated by gravity-driven material transport. However, the scarp is very large, indeed much larger than one would expect to result even from a strong earthquake, and no historical earthquake can be tied to this fault.

Taken all our observations together, we suggest that the KRF is indeed a creeping, intracontinental thrust fault in a mature stage. The shortening rate of 1.1-3.3 mm/yr would make it the fastest single fault system of the Northern Tien Shan. Yet we do not know if the fault may be partially locked, that is, if it may produce strong earthquakes although it is mostly creeping. Future paleoseismological studies could shed light on this issue.

This work was supported by funding from the UK Natural Environment Research Council (NERC) through the Looking Inside the Continents (LiCS) project, the Earthquake without Frontiers (EwF) project, and the Centre for the Observation and Modelling of Earthquakes, Volcanoes and Tectonics (COMET) project. We are greateful to the wonderful support from our Kazakh and Kyrgyz colleagues who organised the logistics – Большое спасибо!